Where Are The Blacks In Fine Dining Restaurants?

Before we start, I’d like to say that I’m Black (in case you didn’t see my picture on the about page) and yes I classify as 100% African-American.  Not sure if I’m “mixed” with anything else, but something seems weird about sending your saliva in the mail for strangers to tell you what percentage of ethnicity you are.  Oh, the drink pictured below?  It’s a Whiskey Cocktail.  It’s mixed with bourbon, syrup, bitters and orange zest.  Grab yourself a drink, water is perfectly fine (preferably Fiji or Smart water.  Disclaimer: Smart water doesn’t make you smart), and let’s discuss the topic at hand. 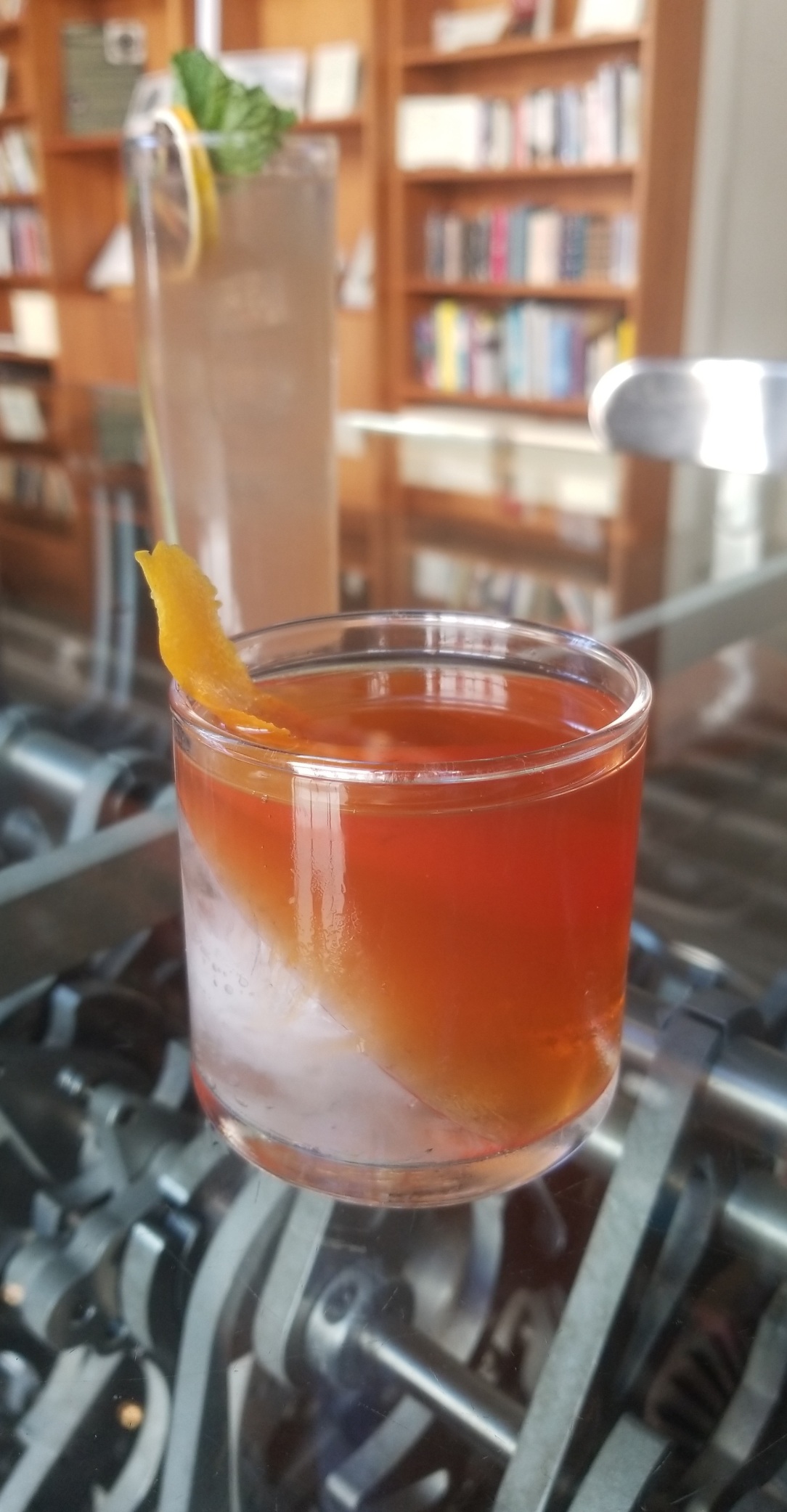 I have dined at a significant amount of restaurants ranging from Michelin-starred to “hole in the wall” establishments.  If the food looks good, chances are I’ll be there.  I don’t know how you choose where you dine, but one of my main keys to selecting the perfect restaurant is to “eat with my eyes”.  A chef who takes pride in their appearance of the food they serve says a lot about the character of the establishment.

I’ve had the honor of dining with various people in great places throughout my SavoryTravels through the United States.  I have eaten with Blacks, Whites and Asians, some who were “foodies” and some who simply like food. One thing that stood-out to me when dining at most of these restaurants is the lack of Black people.  It stands out so much that I decided to write about it.

First, let’s discuss “Fine Dining”.  There’s a true definition of Fine Dining which is described as “full service restaurants with specific dedicated meal courses. Décor of such restaurants features higher-quality materials with establishments having certain rules of dining which visitors are generally expected to follow, often including a dress code” (<–Well.. According to Wikipedia and Google).

But, how do I describe fine dining?  I classify fine dining as somewhere that holds its employees to a true standard.  Exceptional service, quality food, quality materials, attention to detail and a night where you feel excited about the amount of money you’ve spent.  Some of the restaurants that I’ve been to that I consider “fine dining” are : Marcels, Fiola Mare, and Dabney (Washington, D.C.), Bacchus (Milwaukee, Wi), Plant Food & Wine (Venice, California) and Luce (San Francisco, CA) just to name a few.  Let me reiterate, Fine Dining is whatever YOU expect it to be.

Where are the Blacks? In no means, form, shape or fashion do I believe that I am “better” than others simply because of where I choose to dine.  I am realizing that the more I dine in these establishments, the more noticeable something is becoming.  When in these restaurants often times, the only Blacks I see are either servers or chefs/cooks.  I’m not one sided when it comes to race, but sometimes you can’t help but wonder.  I’ve read books and heard stories of “You can serve us, but you can’t sit with us” and I’m wondering if that’s still subtly present in today’s society.

Do Blacks Have Lower Dining Standards? I do A LOT of research on restaurants and can probably give you the ins and outs and why you should or should not dine there.  I’m noticing that when I provide details and descriptions of these restaurants and check back with the same individual who asked me for suggestions, they end up going to some kind of chain restaurant instead.  There is absolutely nothing wrong with a chain restaurant but I assume you wanted more because you reached out to me.  The restaurants that I suggest are no more than an extra $50-75 from your favorite chain restaurants (Red Lobster, Cheesecake Factory, etc.) which brings us to a separate issue.

Why Don’t Blacks Eat Outside of Their Natural Habits? Yes, I know, that question maybe a little fucked, and I understand we aren’t animals, but I do understand when someone is “afraid” of trying something new.  Often times, I go to different restaurants with the focus of trying a “new” item.  I then share that item with social media and ask a question behind it.  What have you tried “new” lately?  I ask that because we often get so stagnant and relaxed with our standards, that we can’t try something as simple as a different textured food.  Is it because we’re afraid of the name of the food?  Or is it because of our beliefs?  I’ll ask, if I put a blind fold on you, and provided you with Octopus, I guarantee you would tell me it’s good and it has the same consistency of shrimp.  Blacks are generally known to eat: Soul Food, Fried Foods, Seafood, and Other things that are jam-packed with sugar and fat.  But, what about dining at a vegan restaurant?  What about trying Escargot (Snails)?  What about taking a group of friends to go try something that you’ve never had before?

Can Blacks Not Afford “Fine Dining” Restaurants? We ALL know that the income discrepancy between Blacks and Whites are staggering.  Chances are you make less than your White counterpart that is doing the same job as you.  This is a fact.  I understand facts.  So, I leave the facts the way they are.  Assuming you have 40% of your check left over (assuming), why don’t you spend your money on an experience rather than a meal?  Food may NOT be your thing and I understand that.  But, what’s wrong with researching a restaurant that is highly regarded as one of the best in your area?  Why are you traveling out of state just to end up at “Ceci’s Chicken and Waffles” (Little Rock, AR)?  By the way, their food is pretty damn good.  I’m sure Blacks can afford fine dining restaurants because if you go to your local standout “steakhouse”, you’ll see a significant amount there.  There’s nothing wrong with a steakhouse, but it seems to be the “go-to” in the Black community when choosing a “fine-dining” establishment.

Are Blacks treated Poorly in Fine Dining Restaurants? I’ve heard stories of Blacks not being treated the same as Whites or other races while dining.  Is there a rumor between restaurants that Blacks don’t tip nearly as good?  I can honestly say that I’ve had to have a “conversation” with a friend or two because of the lack of “tipping” they provided while dining.  Not tipping an appropriate amount shows that you don’t value the thought of someone “servicing” you.  I understand it’s their job and they chose that profession, but some rules are rules that don’t need to be mentioned.  Tip 18-20% each time, period.  If you decide to tip less than that, then chances are you need to speak with a higher authority at the restaurant because of your displeasure with the service and/or food.  I’ve talked to White servers and they’ve told me that Blacks don’t tip well from their experience.  I have to ask, do we actually KNOW how to tip?  (I’m not insulting your intelligence, just asking)  I also have to ask do Blacks think they will be treated differently dining in fine dining restaurant, and thus they are “on edge” waiting to be treated poorly because it’s the experience they’ve had or heard of.

Why should Blacks dine at Fine Dining Restaurants? It indirectly teaches you how to try new things and you will also learn how different techniques are used for everyday foods.  Something as simple as chicken can taste differently from how you prepare it because the chef decided to use truffle oil instead of regular olive oil. It also gives you the opportunity to get dressed up, enjoy a great meal and have an experience.  Dining at different restaurants will help you have an open conversation about an experience you’ve had with others so that they can take your advice and branch out on their own.  I notice that a lot of Blacks go to restaurants based off of word of mouth, not from their own research.  If you are going to spend your money on the same thing, how is that benefiting you from learning throughout life?  I understand that you may not care about where you eat but why shouldn’t it be as important as the car you decide to buy?  Both are depreciating assets 🙂

Overall, this is just one of my many random thoughts that I felt I should share.  Food makes me happy and I’m pretty sure it makes most of you happy as well.  There are a LACK of FINE DINING establishments in the African-American community.  I’m not sure as to why but I absolutely know for a fact that it’s an area where we are not strong.  I have been to and know of some that are considered fine dining.  SavannahBlue (Detroit, MI), Red Rooster (Harlem, NY) and Ida B’s Table (Baltimore, MD) are just a few that come to mind but if you know of any African-American Fine Dining establishments, please let us know.

3 comments on “Where Are The Blacks In Fine Dining Restaurants?”