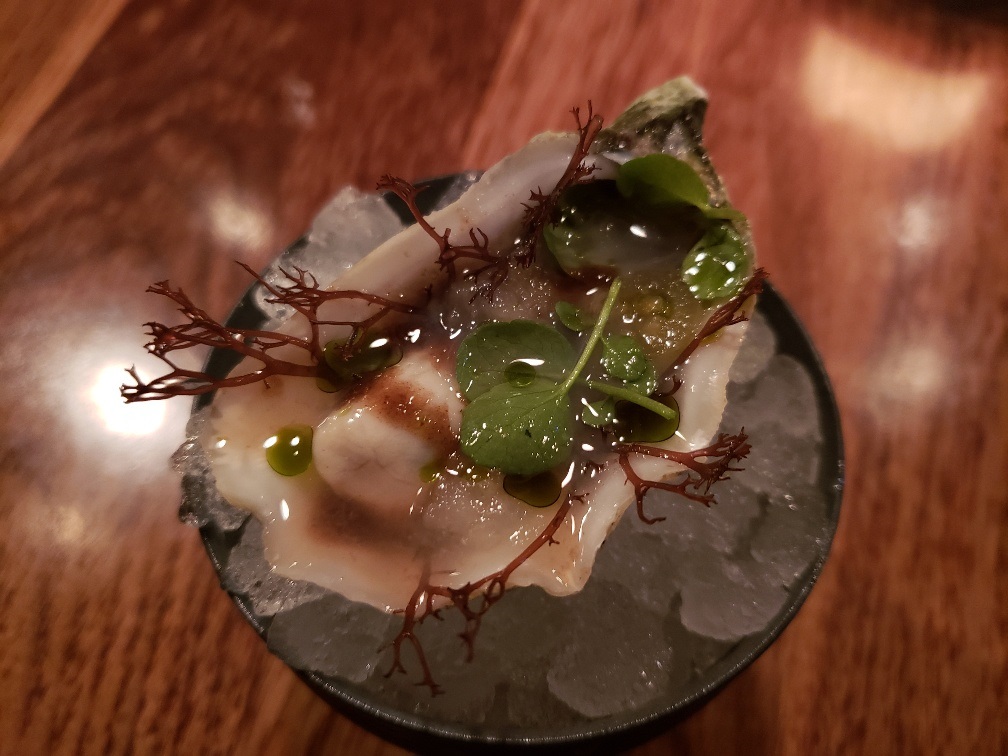 What’s your standard when it comes to dining?  Is it the customer service?  The way the food is cooked?  Or the overall experience?  Every once in a while, you have to “treat yourself” to that one meal that you’ve always wanted.  A place that’ll make you feel special, and one where you’ve thought of going for the past few months but could never find a baby sitter.

Smyth, which is a 2 Michelin Star restaurant, that offers 3 different tasting experiences for you to choose from.  The open kitchen surrounded by a personable dining room is a site to see.  The name Smyth is dedicated to the farmlands in Smyth County, Virginia, where more than five years were spent.  The restaurant aims to make your experience more enjoyable than it should be.

I went with the classic Smyth menu which consisted of about 7 or so dishes.  The Kumai Oysters and Golden Beets were my first two dishes.  The Kumai Oysters were marinated with Dulse and Juniper.  Dulse is a form of seaweed which has a similar taste to a light bacon.  The dish was meaty and a bit sweet, with the flavor of the oyster liquor.  This was one of those dishes that you wishes you had more of, because it was so decadent and flavorful. The next dish was the Golden Beets which were marinated in Togarashi Peppers.  The peppers were a bit unnoticeable as it blended well with the Beets.  The Beets sweet as well, but not overly sweet.  It was more mellow with an earthy taste, and have a vinegary flavor to them as well.  I’m not big on beets, but this dish was packed with flavor.

The next two dishes were the Fluke and Lobster.  The Fluke was lightly steamed with Fermented Green Tea and Sorrel.  What stood out about this dish was the fish, which was the star of the show.  It was light, buttery, and flaky.  The Sorrel added the earthiness to the overall dish, but the smell of the Fermented Green Tea doesn’t go unnoticed.  It gave an aromatic smell to the dish that drew you in with each bite.  The Lobster was made in Kelp Vinegar and Lima Bean Miso.  The Lobster had a buttery flavor to it, which worked well with the sour flavor of the Kelp Vinegar and the warming quality of the Lima Bean Miso.  This dish was rather small, so one spoonful and the meal is over.  I would’ve loved a slightly bigger portion than what was presented, but it was still extremely good.

The last entree was the Aged Ribeye with the Brioche Donut.  The Aged Ribeye was topped with reduced cream and Black Trumpet.  This dish wasn’t my favorite.  It lacked salt and actual flavor.  At one point it tasted as though I was eating a burger that was formed into a piece of steak topped with dry, earthy mushrooms, which didn’t appease me too much.  The Brioche Doughnut with Aged Beef Au Jus was the accompaniment with the dish.  I’m not quite sure how I felt about a Doughtnut to go with the Steak, but it was quite unusual for me.  I would’ve loved to see some kind of leafy vegetable with it, but as far as texture, the steak was a bit dry and a tough chew.

The final dishes of the day were two desserts.  Milk Chocolate and Egg Yolk.  The Milk Chocolate was made with Raspberry Preserves and Shiitake Mushrooms.  Think of your favorite milk chocolate candy bar with a raspberry after taste with an earthy flavor.  I never had mushrooms and chocolate together, but it absolutely works.  This dish was bitter, sweet, and a bit salty, but each element worked well with each other.  The last dish was the Egg Yolk.  It was soaked in Salted Licorice with Frozen Yogurt Meringue.  I never had Egg Yolk in a dessert, but I was intrigued by how it would work together.  The dry flavor of the yolk that went along with the gooey texture of the Meringue was a perfect balance.  I’m not a fan of Licorice, but I found that the combination of all the flavors was surprisingly well balanced and flavorful.

Overall, I enjoyed this restaurant and my experience, but the steak was a bit underwhelming for me.  The overall flavors of the other dishes will not hide behind my dislike for one of the main courses, but I’d give this restaurant another shot.  If you decide to go, let me know what you think.