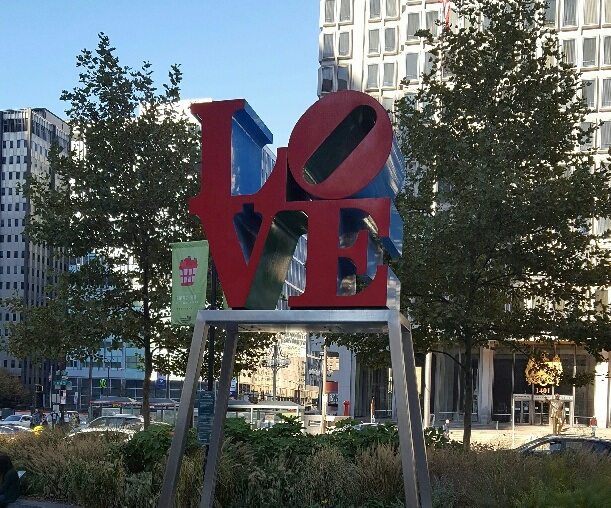 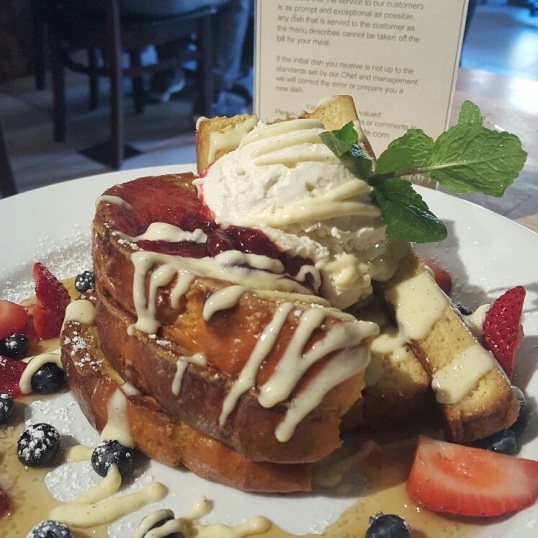 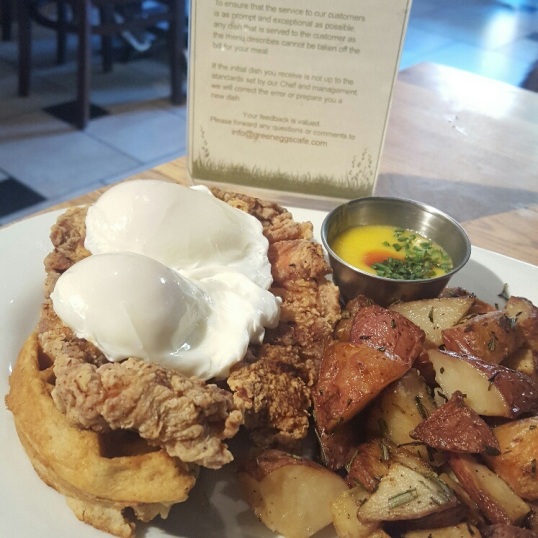 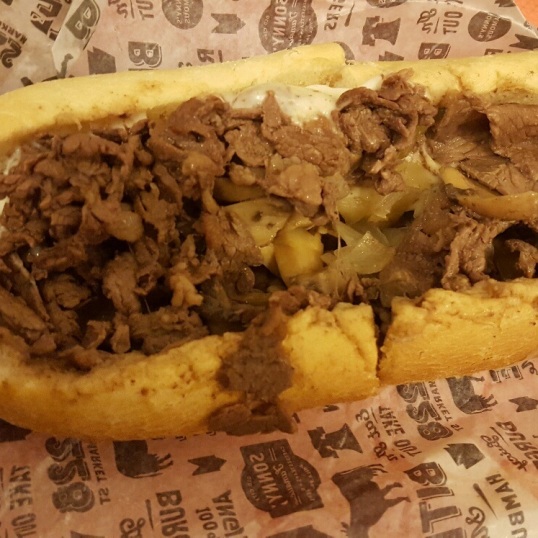 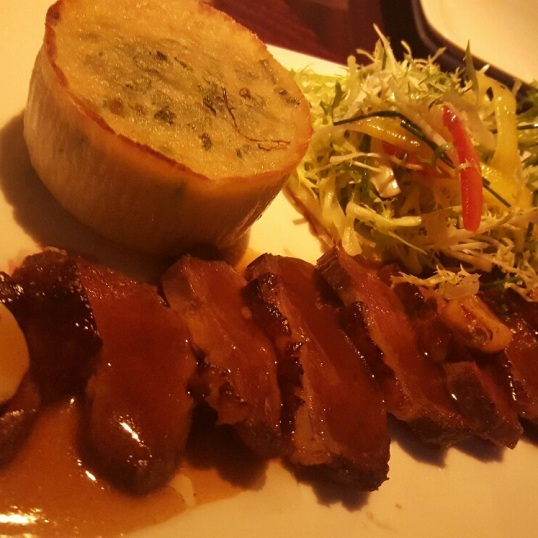 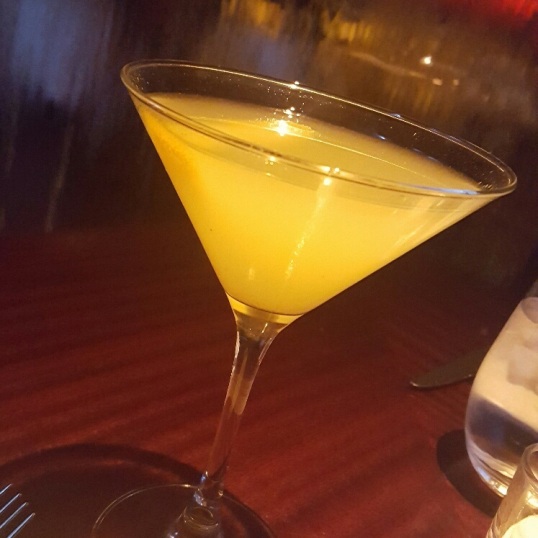 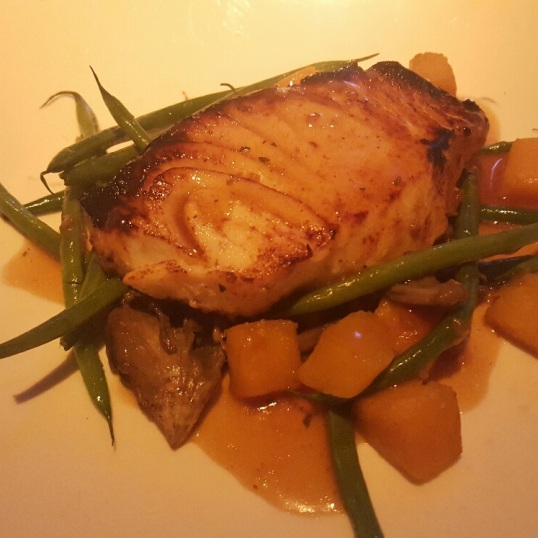 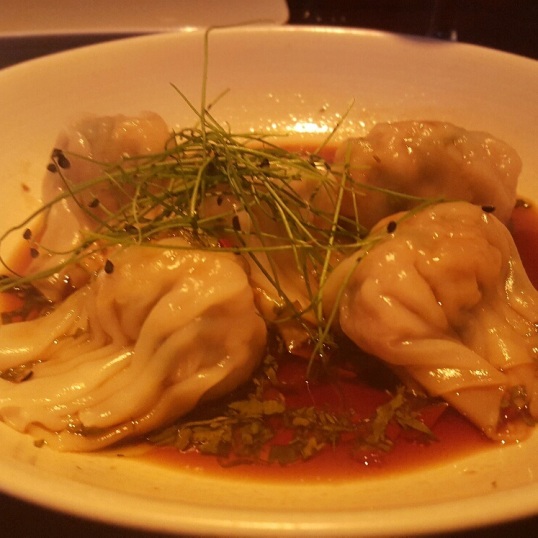 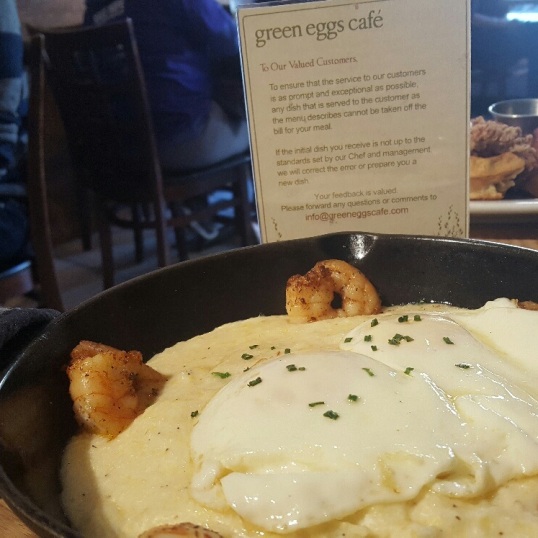 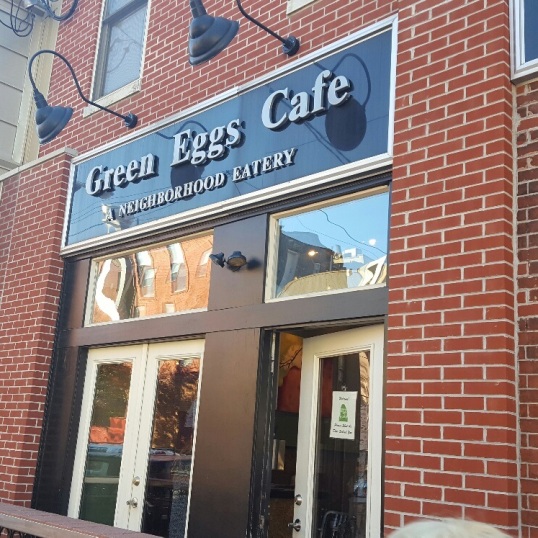 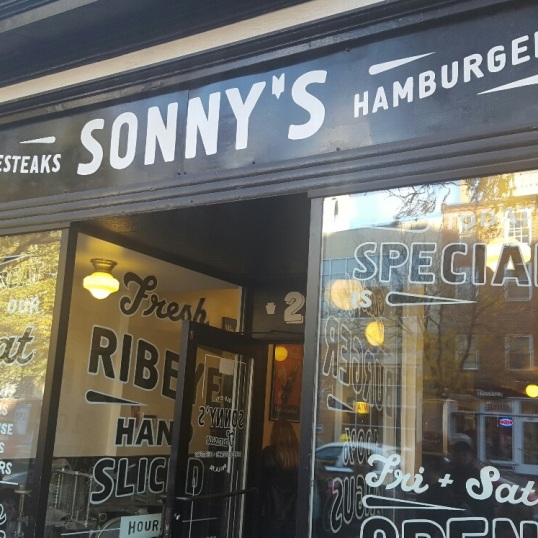 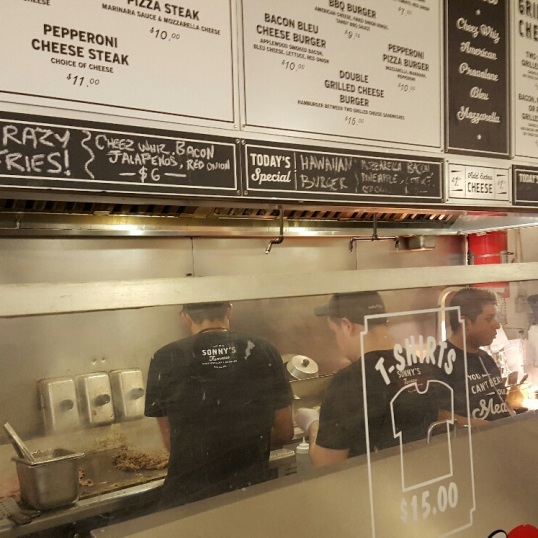 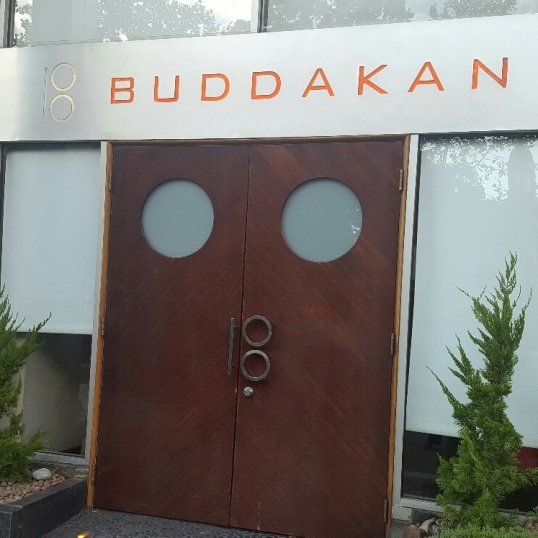 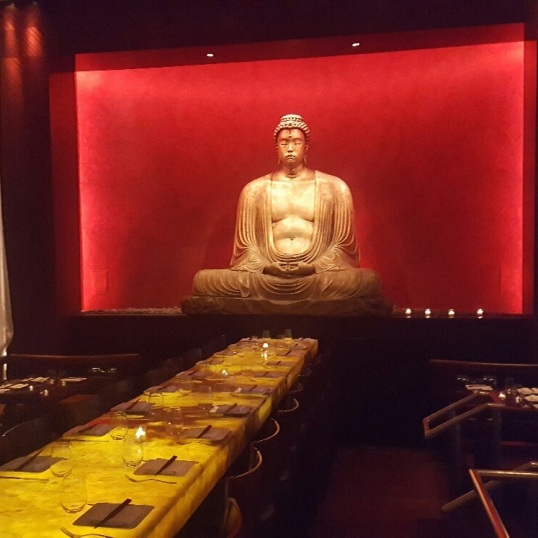 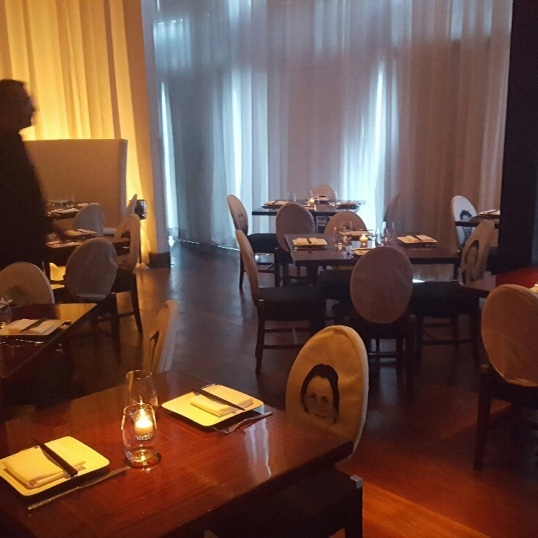 The next item was the Chicken & Waffle Benedict.  It was a 6 oz fried boneless chicken thigh, two poached eggs, and topped with maple syrup and hot sauce hollandaise.  This item was so/so as the waffle wasn’t too spectacular and the chicken was a little soggy.  Maybe it wasn’t fried long enough, but it was still good.  It did lack salt and pepper on the chicken which should be basic condiments to cook with when making any type of meat.  The poached eggs were perfectly cooked and the potatoes on the side were a nice garnish as well.  The waiter explained that they had two types of potatoes, one with rosemary and the other with green peppers and onions.  Unfortunately you couldn’t get rosemary spiced in with the green peppers and onion potatoes, which was a disappointment, but I’m not big on breakfast potatoes so it didn’t matter to me.  I wanted to point it out just in case you are, you’ll be prepared for the answer which some may call asinine.  The last dish that was ordered was the creole shrimp and grits.  The grits were perfectly cooked and tasted like it was made with cajon seasoning and heavy cream.  The presentation was off as I believe instead of making the dish with 6 small shrimp they could’ve used 4 big shrimp and not put it around the rim of the dish.  If you’re into shrimp and grits, I’d recommend this dish, but don’t expect it to look amazing.  The taste is there but the presentation is off.

(Lunch):  After breakfast I decided to head to the mall to walk around an do some window shopping.  I enjoy window shopping because when I hit the lottery (fingers crossed) I know where everything is and how much it’ll be.  It also helps you work up another appetite and King of Prussia is big enough where you’ll definitely work up an appetite.  After leaving the mall, I decided to go downtown to take pictures of the “LOVE” sign, another indicator that you’re in Philadelphia.  As I was taking pictures I ran into an officer and asked him and another gentleman where to go for the best cheesesteak.  I now understand and realize that was the most stupid question I could ask someone in Philadelphia, especially if they’re born and raised.  Maybe I didn’t ask the right question because I stood there for 8 minutes and 37 seconds as they talked to each other about the best cheesesteak and then concluded by telling me “Anywhere you go has good cheesesteak”, geeeeee… Thanks. (side eye)  I ended up going to Sonny’s which was walking distance from the restaurant that was chosen for dinner.  The cheesesteak was good, but nothing to brag over, and please spare me your “You should’ve went to (insert your favorite cheesesteak spot that your bestfriend will disagree with)”.  There wasn’t much to say about the place or the cheesesteak so I’ll spare you any details and you let me know what was good about the place you ate cheesesteak at.

(Dinner):  Yes, the main event.  The recommendation of the night was Buddakan, an asian inspired restaurant in downtown Philadelphia.  The restaurant is part of a Starr network.  Stephen Starr is the CEO of Starr Restaurants, and is one of the largest multi-concept restaurant companies in the country.  It was either this place or Morimoto and what was decided was Buddakan.  For an appetizer the Dim Sum dumplings were ordered. Chicken and ginger dumplings with sesame dipping sauce.  I’m not big on asian cuisine’s but this dish was amazing.  It was light, full of flavor, and it was just enough to not fill you up.  Of course that’s what a typical appetizer is supposed to do, but I’ve been to places where they give you one bite or a light dinner portion.  For the main course the Five Spice Duck Breast and the Pan Seared Sea Bass were ordered.  Let’s start with the Sea Bass first as it was the most white, flakey, tasteful, pieces of bass I’ve ever had.  It was surrounded with butternut squash, mushrooms, and haricots verts.  There are many pieces of fish to choose from but if you’re stumped and want a fish that’s light then this will be your go to option.  The Five Spice Duck Breast was made with roasted Garlic, corn and scallion spoon bread, and a five spice jus.  I ordered the duck medium and it was cooked perfectly.  The presentation was perfect as well but the highlight of the dish was the corn and scallion spoon bread.  It literally melted on your tongue, no chewing needed.  It had just the right amount of spices and was a perfect accompaniment with the duck.  The duck was great too, it wasn’t too dry or undercooked.  I was thorougly satisfied with this restaurant as the interior was beautiful and I would use this restaurant as the perfect date night spot.

Buddakan- Stuck On The RunWay

Where to Next?  Let’s go on southwest website to see if we can find any cheap flights.  They’re always having sales, but I’m afraid that wherever we land it’s going to be freezing.  If we don’t speak before Thanksgiving, eat well, and have a great time!