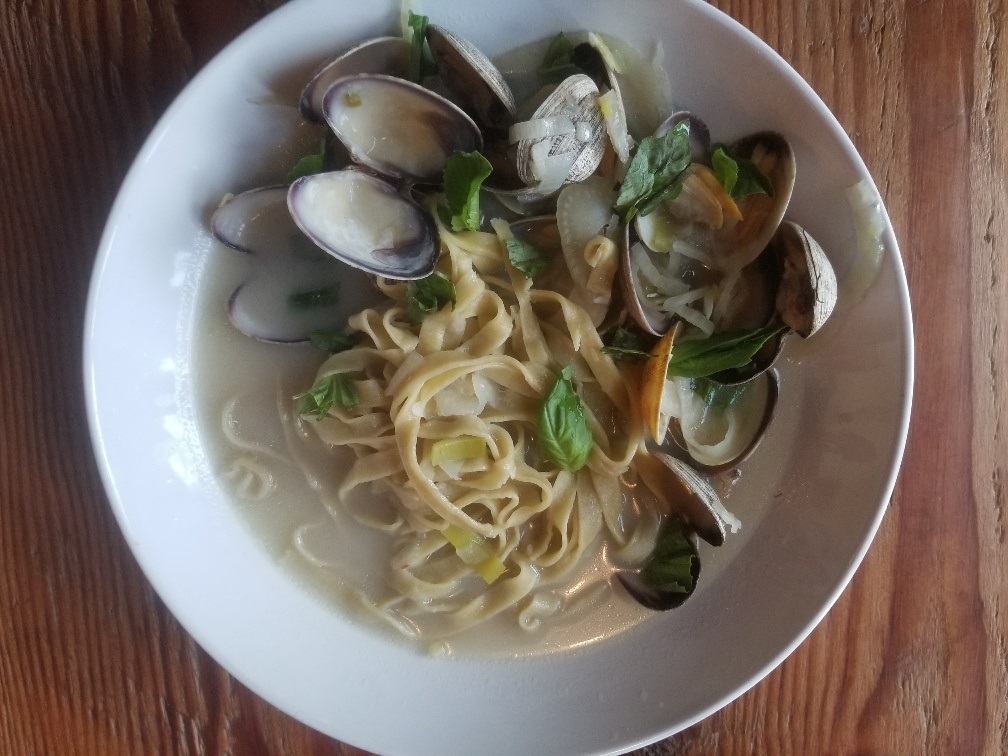 One of the questions that I asked random people when I traveled to Portland is “What food is Portland known for?”.  Apparently, no one knows.  Which is fine, because it doesn’t gravitate you towards one specific dish.  For example, if someone goes to Baltimore, they may search for crabs or if someone goes to Chicago they may search for Pizza or a Hot Dog.  It seems as though Portland is the complete opposite of that, and I thoroughly enjoy that.  The reason why I enjoy it?  Is because I don’t have to listen to people say “You went all the way to Portland without ordering Pig Feet?”.  You have no idea how annoying people are, who have no knowledge of food groups, try to intimidate you by looking down on people for doing the ordinary.

During my visit, I decided to visit Olympia Oyster Bar.  I believed this place to be unique, clean, and have an assortment of oysters that I’ve never tried before.  The restaurant is led by Chef Maylin who brought global flavors from the likes of Japan and Mexico to help inspire the menu.  The restaurant is located off of North Mississippi Avenue, and the interior is centered through large windows that looks as though it seats no more than 60 people at one time.  Yes, that’s your warning to get there early, duh!

I was able to devour around five dishes ranging from a Mushroom dish to a Clam Pasta dish.  I’ll start with one of my favorite dishes of the night.  If anyone knows me, you’ll know that I love eggs and mushroms so when the Pimenton Roasted Mushrooms was presented in front of me, I had the face of a 4 year old in a candy store.  It consisted of almonds, cultured butter, sesame herb sauce, and egg yolk.  This dish offered an assortments of mushrooms such as King Mushrooms and Enokitake just to name a few.  If you’re a vegetarian or a vegan than this is the perfect dish for you.  The earthy flavor that this dish presented along with the sweet flavor of the raw egg yolk was a dream come true dish.  The almonds added a great nutty flavor to combat with the bitterness of the mushrooms, but the King Mushrooms that was on this plate were the best mushrooms I’ve eaten in my life.  When you decide to come to this restaurant, make sure you order this dish, it’ll be well worth it.  It may even have you think about becoming a vegan.  Well, maybe.

The next dish that was ordered was the Manilla Clams & Linguine.  It consisted of handmade pasta, fennel leek, and goat butter.  The pasta was fresh and the clams were too.  I really enjoyed the fennel with this dish because it helped bring out the ocean flavor of the clams.  Clams sometimes can be a little salty at times, so that’s why the grainy flavor of the pasta really helps balance the flavor of clams.  Fennel has a taste that’s similar to an onion and  celery which is sweet but not sweet enough to over power a dish.  For the price of this dish along with the amount they provide you, you’re definitely getting a steal.

The last few dishes that were ordered was the Steelhead TarTar and the Kataifi Oysters.  The Steelhead TarTar consisted of lime, lemongrass, avacado, cilantro, and persimmon.  Steelhead fish is similar to rainbow trout.  The flavors of it are sweet and fatty.  The avacado along with the lime worked well in terms of it being presented as a ceviche, but this dish was a tartar.  I would’ve loved to see this dish presented with pita chips or toasted bread.  This was my least favorite dish because the sauce that was made with this dish was too sweet.  I want to be able to distinguish the difference of a ceviche from a tartar, but this dish was very similiar to one.

The Kataifi Oysters were a dish that was like one I wouldn’t dream of having.  It consisted of Shredded Phyllo, Smoked Avocado, Serrano Ham, and Morimoto dust.  If you’re like me you’re probably wondering what the hell is Phyllo?  “Phyllo is very thin unleavened dough used for making pastries such as baklava and börek in Middle Eastern and Balkan cuisines.”  This dish was interesting in a sense of me never having an oyster that was covered in dough before.  The taste of it was pungent because of the smokiness of the avocado and the oyster being fried.  The ham however complimented it well, and the Phyllo wasn’t as bad as I would’ve expected it to be.