The name of this restaurant brings back memories, doesn’t it?  If it doesn’t, I’m curious to know what you played in grade school.  I was on the hunt for upscale comfort food in a neighborhood area, and I believe I found what I was looking for.

Duck Duck Goose, which is located off of South Broadway St, in Baltimore, MD, and focuses on different ingredients prepared through simple cooking methods.  They focus on a classic French technique and their range hits as far as Parisian influences.  The interior of this restaurant is pretty small, but if you’re able to sit at the bar, which gives you opportunity to people watch while you eat, I suggest you sit there.

During my visit several dishes were ordered.  The menu sounded as though everything would be good, but my stomach is only so big that I can eat but so much.  Beef Tartare, Japanese Eggplant, Scallop Ceviche, Risotto, Tournedos, and Clams and Mussels were the courses for the evening.  I’ll start off with the Beef Tartare.  Prime Tenderloin, Dijon, and Egg Yolk were freshly presented for you to mix yourself.  The Tenderloin was meaty, savory, and filling.  The Egg Yolk was the most beautiful Egg Yolk I’ve seen and the Dijon gave this dish the extra kick it needed.  When you mixed all three of the items together, a concoction of flavors hit your taste buds with each bite.  I’ve had Beef Tartare before, but not where it looked so pure and smelled so fresh.  There were no bells or whistles with this dish, just great unique ingredients.

The next dish that was ordered was the Japanese Eggplant.  It consisted of Lemon yogurt, Fresno peppers, mint, and pistachios.  Hello! Vegans, are you out there?  Stop what you’re doing, and get to this restaurant.  Besides the vegan restaurant in Venice that I went to last year, this was the best vegan dish I’ve had since.  A beautiful piece of Eggplant topped with peppers, mint and pistachios and surrounded by Lemon Yogurt will make you happy that you chose the wrong path in your “food life”.  (Yes, being a vegan is the wrong choice, don’t debate me.)  The sweet flavor of the Lemon Yogurt to go with the nuttiness of the pistachios and the smokey flavor of the peppers will send your taste buds on a ride they’ve never been on.  There’s only so much I can say about this dish, before I start slobbering on the keyboard, so when you go make sure you let me know what you think.  (No, this isn’t a vegan restaurant)

The third dish that was ordered was the Scallop Ceviche.  Hello, pescatarians!  Are you out there?  Didn’t you just read what I wrote to the Vegans?  You’re not exempt!  This dish is exactly what you need.  It’s beautifully presented and includes verjus, fresno chilies, and toasted almonds.  This isn’t a dish where you have a nutty flavor or texture to it, this is a light, buttery, and smoky dish.  The Scallops are finely chopped in presented in a huge shell, that looks so perfect, you’d contemplate eating it.  Yes, YOU would contemplate eating it, however, it will be engulfed by me.

The fourth and fifth dishes that were ordered was the Risotto and Clams and Mussels.  The Risotto was made with English peas, Goat Cheese, and Parmesan.  This was one of my least favorite dishes of the night, and I’m not saying that because it wasn’t good, I’m only saying it because it was indeed my least favorite dish of the night.  The rice was a bit over-cooked and I would’ve loved for the Risotto to be more creamy, but nevertheless it was still amazing.  The English Peas and Goat Cheese were spectacular together.  It provided an earthy, bitter flavor, and the Parmesan added the smokiness to it.  Add that together with the grainy flavor of the rice and you have one hearty dish.  The Mussels and Clams were nothing short of great.  The chorizo that was included helped with the smokiness of the flavor and the broth that was used was creamy and flavorful as well. 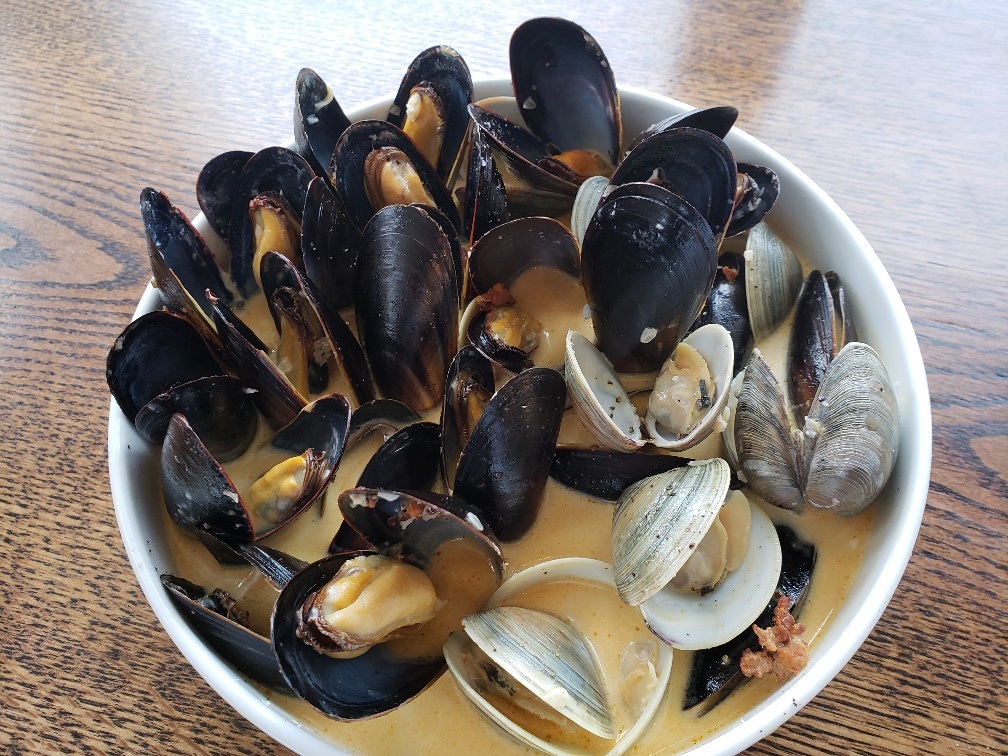 The last dish that was ordered was the Tournedos.  Hello!  Meat lovers, are you out there?  No, not you, Pizza Hut’s meat lovers pizza doesn’t count.  I’m talking about those that love a good filet.  This one is for you.  But, not only was there a perfectly flavored filet, there was foie gras, potatoes, broccoli purée, and red wine reduction to compliment it as well.  Talk about flavor overload.  The buttery taste of the Foie Gras along with the Starchy flavor of the potatoes to go along with the Red Wine Reduction was beyond spectacular.  The Filet was juicy, moist, and seared to perfection.  The Silky smooth taste of the Foie Gras was the star of the show.  I loved how all of these components can still balance the whole dish out so that you get a complete meal.

Overall, this restaurant is a stop what you’re doing, call the person who you love (this place isn’t worth a text), and make a reservation ASAP.  This was one of the best places I’ve been to in Baltimore, and I’m sure you’ll say the same thing after dining there.