First, the restaurant’s name is long as hell, but just saying “Del Mar” is correct when asking about this place.  Second, the view that this restaurant offers is beyond amazing.  Gentrification helped make it happen.  Third, yes this restaurant is a Spanish-Restaurant so practice those Spanish words because I’m going to be using a lot of it in this post.  HA!  Who am I f***ing kidding?  I could barely tell you how to pronounce two of the dishes that I ordered without sounding like a kindergarten student pronouncing the word “no” when you tell them they can’t have something. 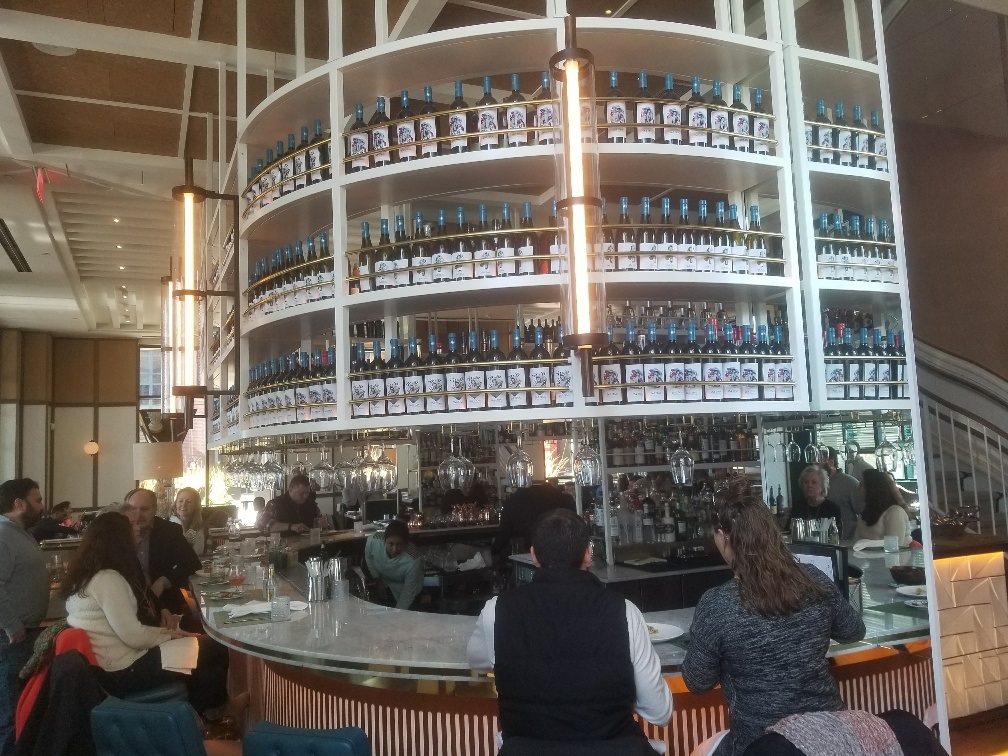 Focus!  Let’s focus on the restaurant and all it has to offer, shall we?  Del Mar is located at the Waterfront in Washington, D.C. which is the newest up and coming Gentrified area where tourist can come to dine at over-priced restaurants.  What once was an area used strictly as a fish-market has now become a place where civilians can NOT afford.  Once we get over the over-market price of an area that used to be a fish market, I can honestly say that the interior of this restaurant is absolutely stunning.  A restaurant with a beautiful view and high ceilings are made for date-night.  Just make sure you bring your wallet and extra cash.

During my trip to Del Mar I was able to order three dishes.  They consisted of Escalivada (which I can’t pronounce), Navajas A La Plancha (don’t even ask), and Paella (Yes, finally something I can pronounce).  I’ll start with the Escalivada which consisted of Catalan-Style Char-Roasted Eggplant, Onions, Red Bell Peppers, Tomatoes, and Anchovies.  You ever have something so succulent, sweet, and tender with a hint of saltiness?  Then this is the perfect dish for you.  The dish had a texture and consistency of a luke warm potato cava, but replaced with vegetables.  The saltiness of the dish came from the anchovies which were fresh and flavorful.  If you’ve ever been afraid to eat anchovies then now is the perfect time, because it’s incorporated in the overall dish.

The second dish that was ordered was the Navajas A La Plancha which is a fancy word for Grilled Razor Clams.  You ever have Razor Clams?  They are the meatiest, sweetest, and best tasting out of all the clam bunch.  Razor Clams have a similar taste to a meatier shrimp mixed with calamari, in my opinion.  The only take away from this dish that I had was why the f*** did they only give me four clams?! I’m not a child, double up on those clams!  For the price you pay, I don’t think 4 is appropriate.

The last dish that was ordered was the Paella.  Paella is a dish that’s loved by everyone.  It’s basically spanish rice with a bunch of other meats included.  The meats that were included in this dish were Lobster, Squid, Shrimp, and Mussels.  Talk about a f***ing Paella mix.  This dish was flavorful with a hint of spiciness with each bite.  If you decide to order this dish, make sure you have some people around you that you actually like.  You can’t eat all of this dish by yourself.  Don’t debate me.  The lobster was a little over cooked, but maybe they thought I wouldn’t notice because it was included with all of the other seafood delectable. Fool me once…..

Overall, this restaurant is an if you can afford it go to.  The prices are a bit over-priced for what they offer, so if you can get Paella at another place then go for it.  The flavors of the dishes were good, but not over the top good.