I just wanted to start this review off by saying, one of my favorite rappers sat at the table next to me during dinner.  Young Dolph!  Are you familiar with who he is?  If not, I’m sure a quick google search will get you up to speed.  It’s not everyday that you get to see  your favorite entertainer, so I thought I’d let the world know of the excitement I had!  (Yes, I took a picture.. No, I’m not posting it.. Yes.. I had the biggest cheese on my face) Now that you’ve read pointless information, let’s start the review shall we?  My first time in Minnesota and all I can think about is how cold the weather gets in the winter.  I kept thinking to myself as I drove past these big beautiful homes were, “Why the hell would anyone live where it’s 10 degrees below 0 in the winter”?  But.. I suppose someone would ask me “Why wouldn’t you?” Which would be a fair statement to some degree, get it? Degree? *ques drums*

Cedar Stone + Urban Table is located inside Mall of America, which is one of the best attractions in the city of Minneapolis.  This was my first time at Mall of America and I was in complete awe as I walked throughout the enormous area.  Not only does the Mall have everything that you can think of as far as clothing stores but it also has a theme park inside!  I always thought it was a rumor when people told me Mall of America is the mall with the roller coaster, but when I walked inside I said to myself, “Damn.. That really is a roller coaster!”.  Most of my time was spent losing weight walking around the mall and working up an appetite before I headed to the restaurant.  When dinner time finally came around I was able to earn 1000 points through opentable.com for making a reservation through them.  Opentable is a website where you make reservations to restaurants you frequently dine at, and earn points towards gift cards for future restaurant choices you may have.  Cedar Stone + Urban Table is a site to see.  It has the most beautiful interior with black shiny tiles, huge windows where you can see planes take off from the airport, and an open kitchen.

I was able to try four dishes during my visit and was pleased with them all.  Bison TarTar, Braised Beef Short Rib, Truffle Chicken, and Baked Gouda Mac and Cheese were ordered at this restaurant.  Usually I start off with the appetizers then the main course then provide you all with details of any desserts that I get.  Today, I wanted to talk about the Baked Gouda Mac and Cheese.  If you know me then you know that I love anything Gouda!  I would debate with you that smoked Gouda is the best kind of cheese out there and should be used in everyone’s ingredients when making Macaroni and Cheese.  When a Gouda is aged the cheese changes in flavor and texture. The flavor gets stronger. Aged Gouda is sharp yet sweet at the same time. It is usually described as caramelly, nutty, and buttery.  The Mac and Cheese also was made with sharp cheddar and had the perfect amount of cheese flavor that any person who isn’t lactose and tolerant would enjoy!  They offer this dish as a side option but I hope one day the executive chef decides to reinvent their menu and put lobster in it to make it a meal.  I think that would be amazing and my mouth is watering just thinking about it now. 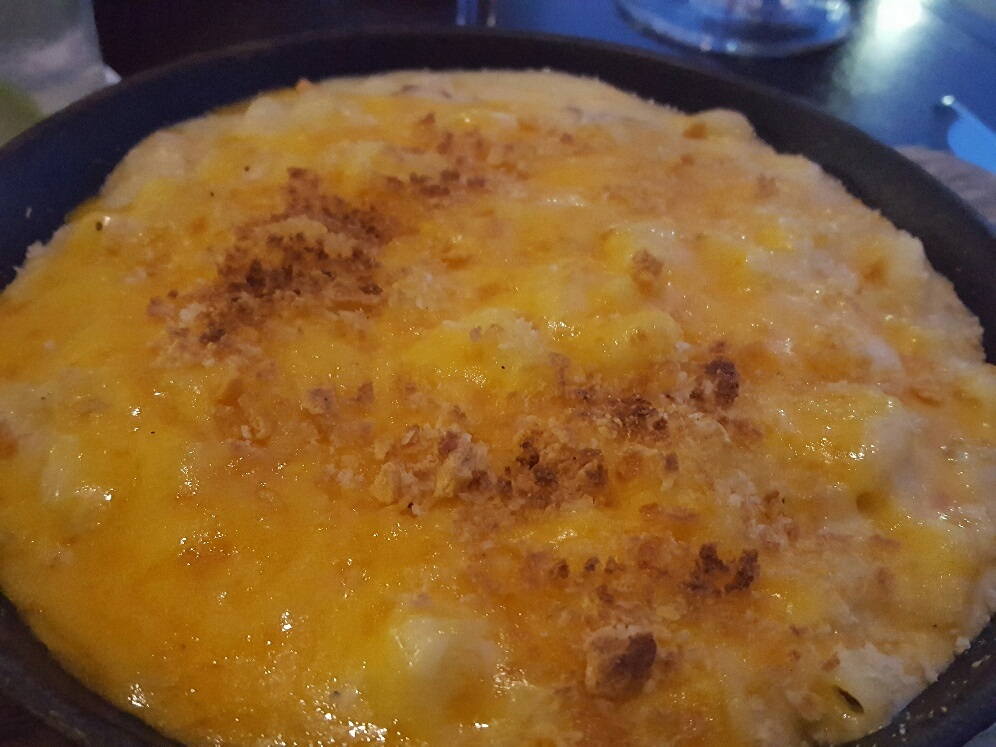 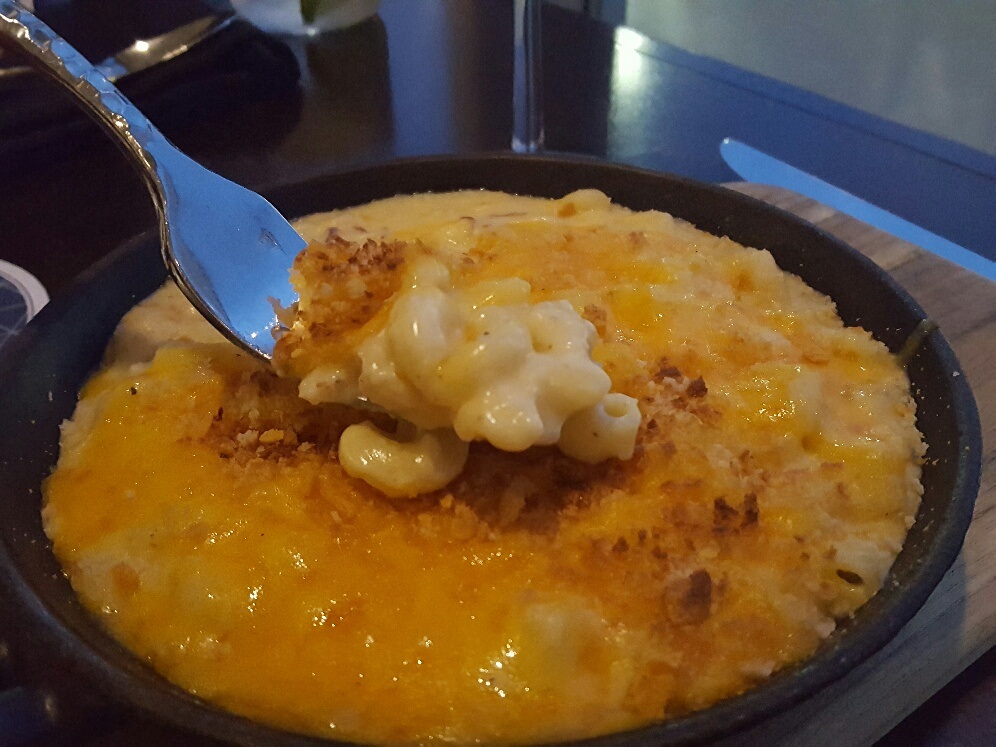 The next item that was ordered was the Bison TarTar, similiar to Beef TarTar but of course in this case Bison was used.  It consisted of sparboe farms egg, sourdough crisps, and a spicy horseradish sauce.  The rawness of the Bison accompanied with the spiciness of the horseradish sauce added the perfect flavors and texture throughout the dish.  Most people have second thoughts on ordering anything that’s raw, especially any kind of beef, but even though it’s raw it is slightly cooked with acid such as lemon juice or another ingredient to help fight the rawness of the meat.  My first time having Beef TarTar was in my mid 20’s and I thought it was pretty good.  If you haven’t had Beef TarTar or Bison TarTar then I would suggest you order it.  It’ll wake up a new sense in your brain and will send your taste buds through heaven!  Also, the dish comes with an egg, and my motto about eggs are, “if you see an egg.. GET IT!” 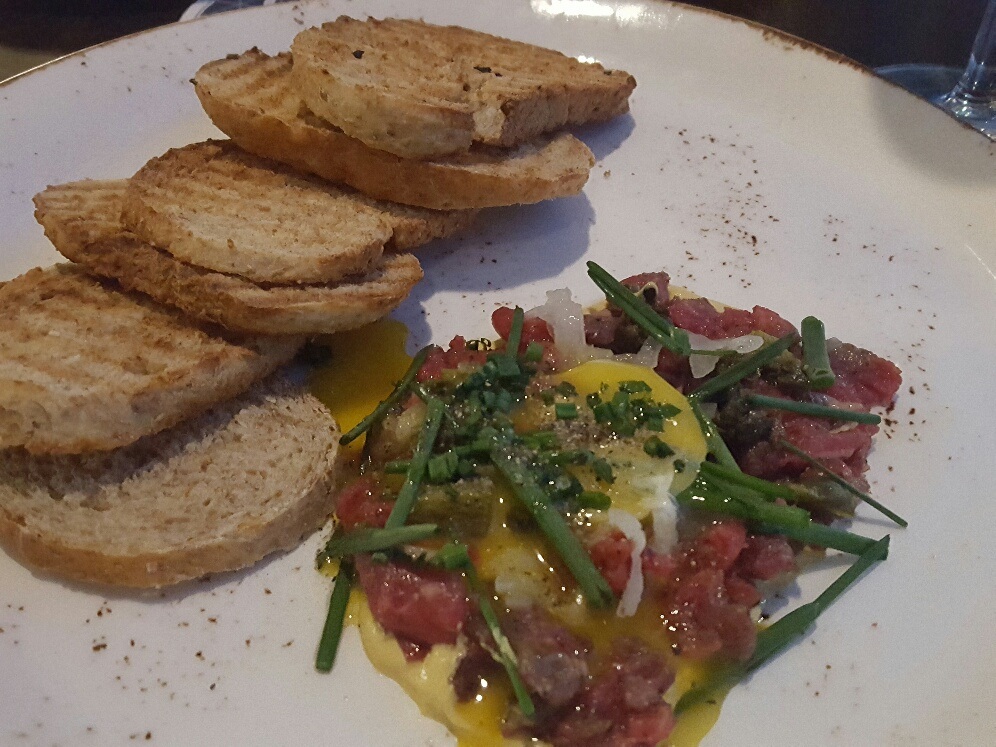 The next dish that was sat in front of me was the 12-hour Braised Beef Short Rib with Wisconsin Cheddar Grits,  and red wine demi sauce.  The short rib literally melts in your mouth as soon as it hits your tongue.  No seriously.  This was the most juicy, tender, savory short rib that I’ve ever eaten. The grits however were another story as they were a bit too grainy for me.  I’d love to see the grits cooked a little longer and not have the cheddar cheese sprinkled on top, but instead incorporated into the grits while it’s cooking.  The dish however, is very filling and I wouldn’t shy away from ordering this dish. 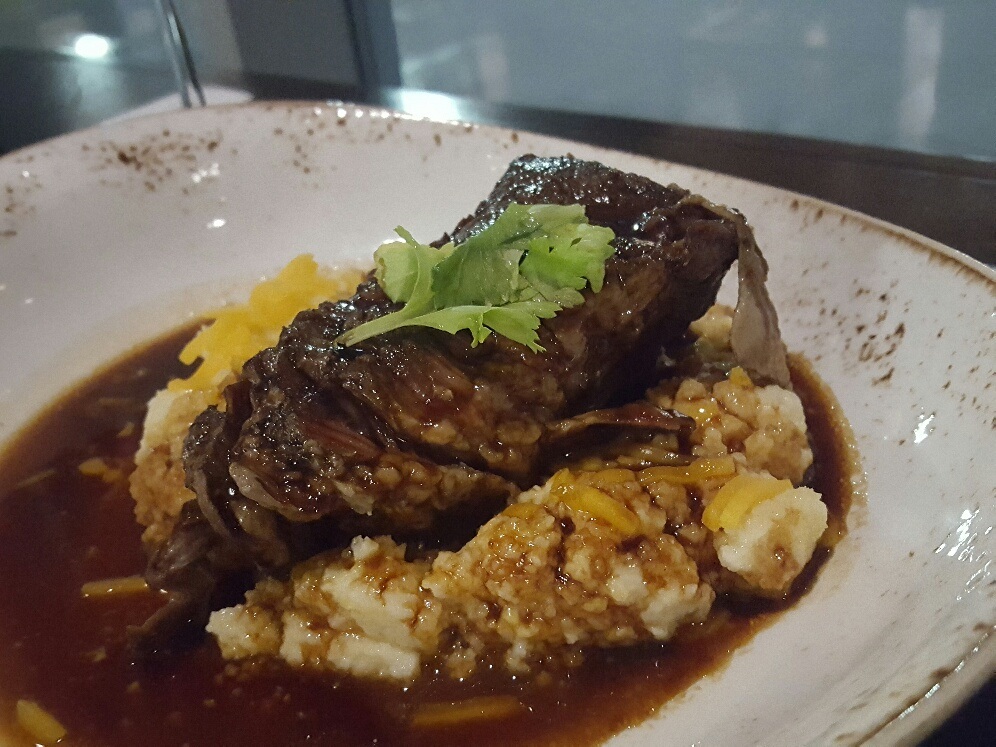 Last but not least we have the Truffle Chicken with Whipped Potatoes, Heirloom Carrots, and Brussels sprouts.  The chicken was very moist but I would’ve loved to have this chicken grilled with this dish to bring out more of a smoky flavor to it.  Usually when ordering chicken at a restaurant it’s considered “playing it safe”, so I wouldn’t’ say too much about this dish.  The vegetables were seasoned well and the potatoes would’ve been whipped more so they didn’t have such a thick consistency to them.  The Brussels Sprouts were pretty good and provided an earthy taste to it.  If you want to play it safe then this is definitely the dish for you. 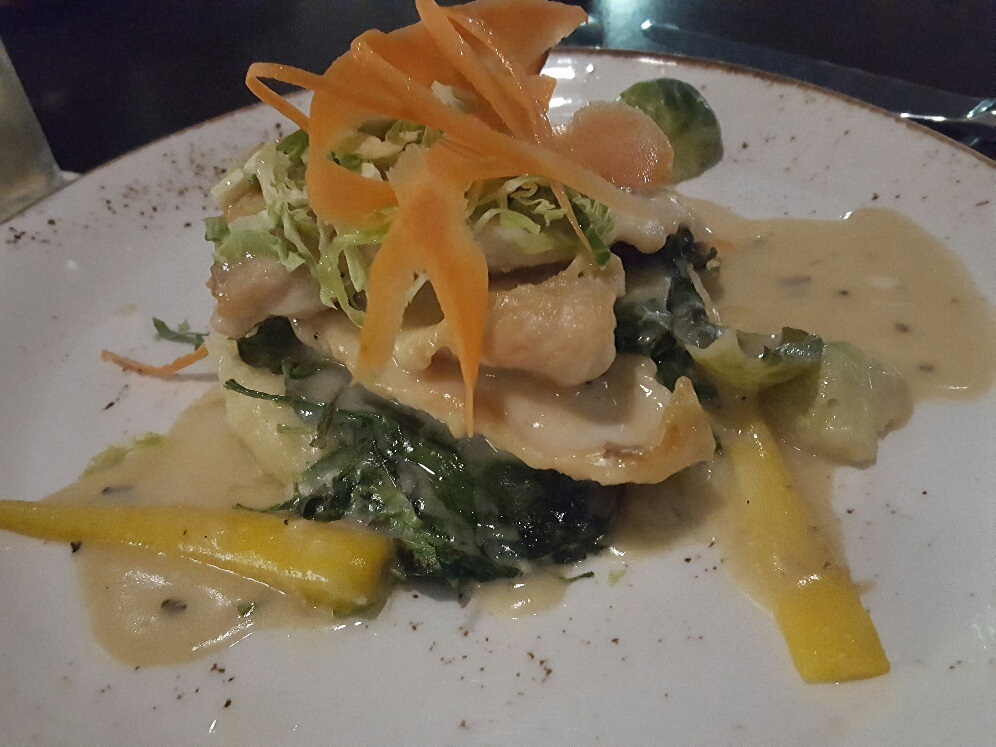 Overall, if you’re looking for a restaurant that’s good for date night, family night, or a quick bite this is your go to!  I had the pleasure of being waited on by Sangay who was an amazing waiter and was able to meet the manager Benjamin.  Both were very excited about the future plans for this restaurant and where it’s headed.