I haven’t been to a buffet brunch in years, but I understand that I’m not missing anything.  I enjoy going to restaurants where a chef is needed, not cooks.  There’s a difference if you didn’t know.  I wanted to try a different spot for brunch so I decided to go with a Filipino brunch.  Purple Patch, which is located not too far from the Columbia area of D.C., has a specialty in Filipino American influenced foods.  I decided to give this restaurant a shot for the day.  The interior of this restaurant has a bar like influence, dim lighting, and wooden tables. 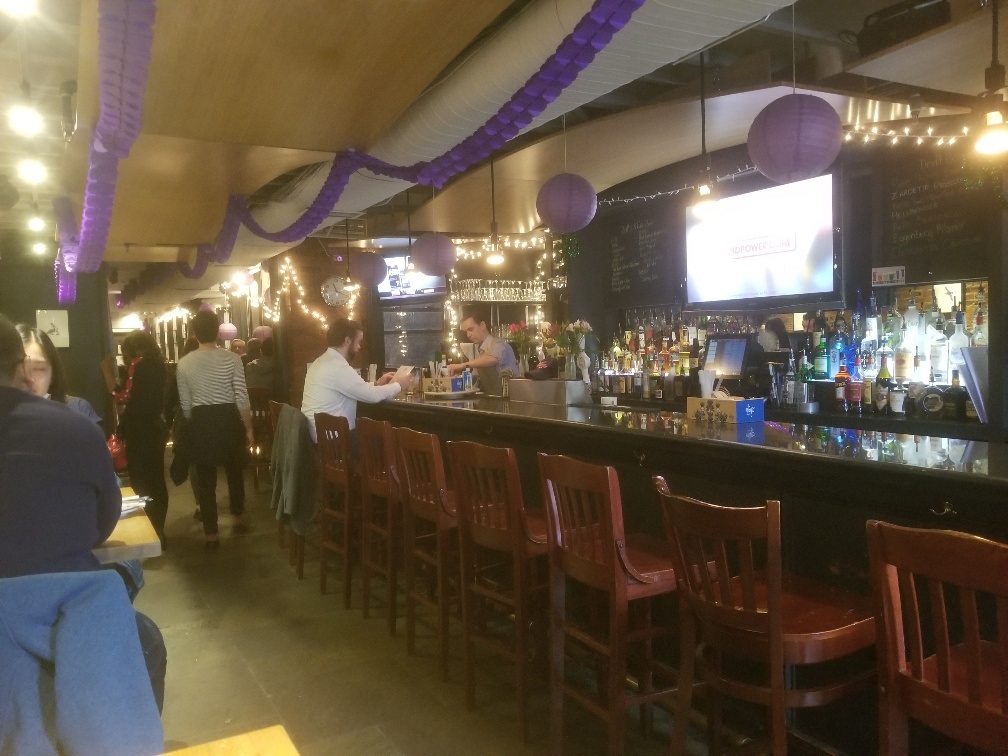 I was able to devour two dishes on my trip. The first dish, I went with the traditional chicken and waffles.  It consisted of a Waffle with Ube Ice Cream and Filipino Fried Chicken.  The chicken was braised with soy and vinegar and then fried.  Amazing to be quite frank with you.  If you’ve never had Ube Ice Cream, it’s a purple yam ice cream.  Yes, it takes like a yam.  (And no, not the yams your girlfriend has)  The Fried Chicken was crispy, flavorful, but lacked salt.  What’s going on with these restaurants not putting salt on their Fried Chicken?  Maybe they’re trying to save my life?  I’ll take it.  The waffle was nice and fluffy and the ice cream with berries added the sweetness to go with the soy flavor of the chicken.

The second dish that was ordered was the Red Snapper & Smoked Bacon Bagel with Cream Cheese, Tomato, Onion & Capers. Of course I had to add an over easy egg.  What’s a Bagel sandwich without an egg?  A bagel.  Pew.  I’ve never had Fried Red Snapper for breakfast, and it’s a fish that I rarely see at restaurants.  I usually find Red Snapper at Asian influenced restaurants or Jamaican restaurants.  Maybe American chefs are too lazy to de-bone them?  This was one of the best Bagel sandwiches I’ve ever had. The bacon was thick cut and the saltiness worked well with the onions.  The onions were red, so if you’re on a date, make sure you limit the onions or your breath will stink for 1 business day.  No seriously.  No matter how much you brush your teeth after you eat onions it’ll still have that onion taste to it.  Just me?  Well. Okay.  The cream cheese was the “cheese” for this sandwich so there was no need for you to order a slice of it. A sandwich fit for a person that has good taste.

Overall, this restaurant is a go-to.  No, it’s a stop what you’re doing and go-to.  Amazing food, good service, but make sure you make reservations or get there early. The restaurant gets packed quickly.