Experience is one of the words that I hold heavy weight to when dining at a restaurant.  The quality of the food, the taste, the atmosphere are all very important, but when I leave the restaurant I think to myself, “how was the experience?”.  Today, I encountered my first experience as a blogger who wasn’t taken seriously.  I wasn’t shown hospitality, lines of communication were improper, and my value didn’t matter when informing the owner of this establishment who I was and what i’m here for based off a conversation I had with his employee.  I asked to speak with the chef, but to no avail.  Although the owner tried to elucidate the reasoning for the lack of communication that he pays his staff member to thoroughly do as he is required, I sat there feeling devalued and underappreciated.  I am traveling to your restaurant to review it, how should you handle a food critic coming to your restaurant?  There are many ways to handle that, but one thing you don’t do is shake my hand once and I don’t see you for the rest of my visit.  There was no impact in conversation and no question of how my dining experience was.  Was it really because he wasn’t expecting me to come in?  Was it because he didn’t take me serious because I’m black? I never, EVER, pull the race card, because business is business and you can value who you want, but when it’s blatant deviating of showing hospitality, I will look at that almost as if it’s disrespect.  Ill-intent happens and I understand that, but there’s always the common courtesy of going above and beyond for someone that is taking the time to sit down and write a thoughtful review of the establishment you own.  What makes this more awkward is that I was in front of the owner.  Not the manager, the actual owner.

I wanted to start this post off just by informing you all to know your worth and let know one devalue you.  I know how to separate personal from business so even though I felt some type of way personally about how I was treated, I have a duty to give you all some insights about this restaurant.  The restaurant is located in Canton and opened a few months ago.  The menu is very straight to the point with no more than 20 items listed including appetizers. I actually enjoy menu’s like that because it forces me to choose immediately what I want.  99% of the time, I already know what the restaurant has to offer and what I’m going to order, but for those who aren’t like me, you won’t have the headache of knowing what you’re going to eat like you’re at the cheesecake factory.  The interior has a farm to table look, which coincides with the theme of the restaurant.  The restaurant focuses on locally sourced and simple dishes.  The restaurant looks as though it seats about 60 people having an upstairs dining area as well as a downstairs.

Three dishes were ordered which included a Sweet Potato Pierogi, Cast Iron Chicken, and Lamb Porterhouse.  Let’s start off with the Pierogi.  The Sweet Potato Pierogi included celery root slaw, bay bleu, and mushroom cream sauce.  Honestly, this is the best pierogi I’ve ever tasted.  The sweet potato was creamy and sweet but the mushroom cream sauce added the perfect buttery taste to the whole dish.  The bay bleu was also great in adding a herbal flavor to the dish. I used to eat Pierogi’s when I was a teenager but hadn’t had one since then.  It brought back alot of memories eating a Pierogi because I didn’t have much money growing up, so eating one of those helped fill me up. 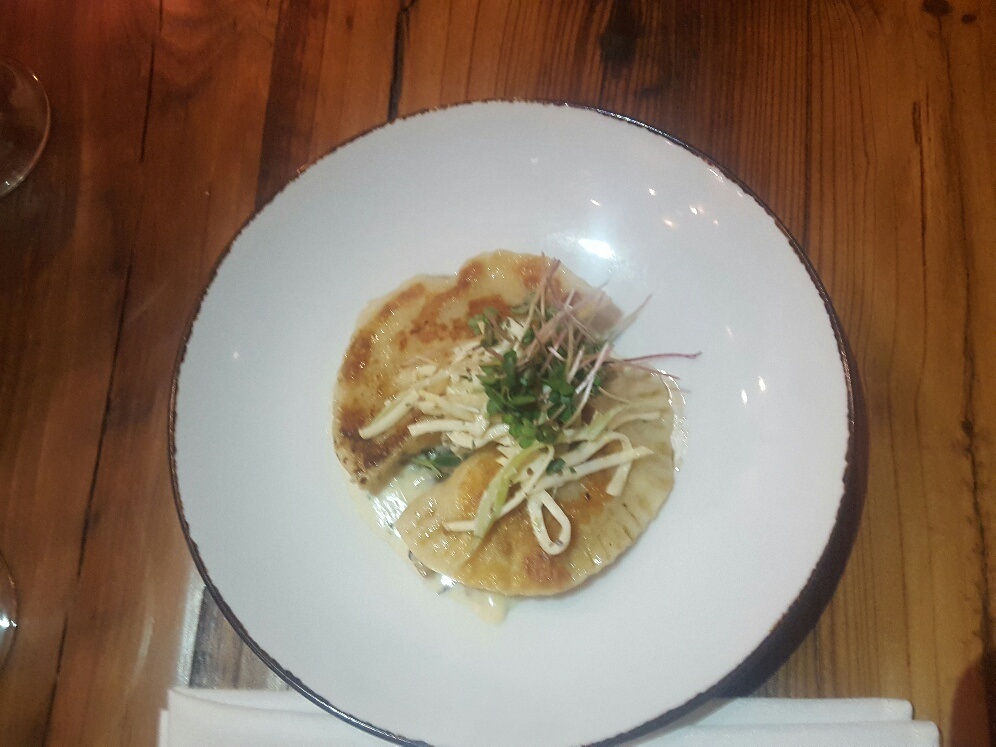 The next dish I wanted to order was the Wagon Wheel Ranch Pork Collar that came with brussels sprouts, smoked cheddar grits, and mustard-cider jus.  Unfortunately, they ran out of pork collar which I understand happens at times, but I went to this place to dine on a Wednesday.  It’s scary to see a restaurant run out of food on a Wednesday.  I’m pretty good with adapting to situations in restaurants so I opted to have them make me the Iron Chicken and keep the sides that came with the Pork Collar dish.  The chicken was cooked perfectly, and the sides were amazing as well.  It was a good recovery from the restaurant because I had my mouth set on the pork collar, because I think it would’ve went well with the smokiness of the grits and brussel sprouts.  This was one of my favorite dishes of the night and if I decide to go back, I’d order it again. 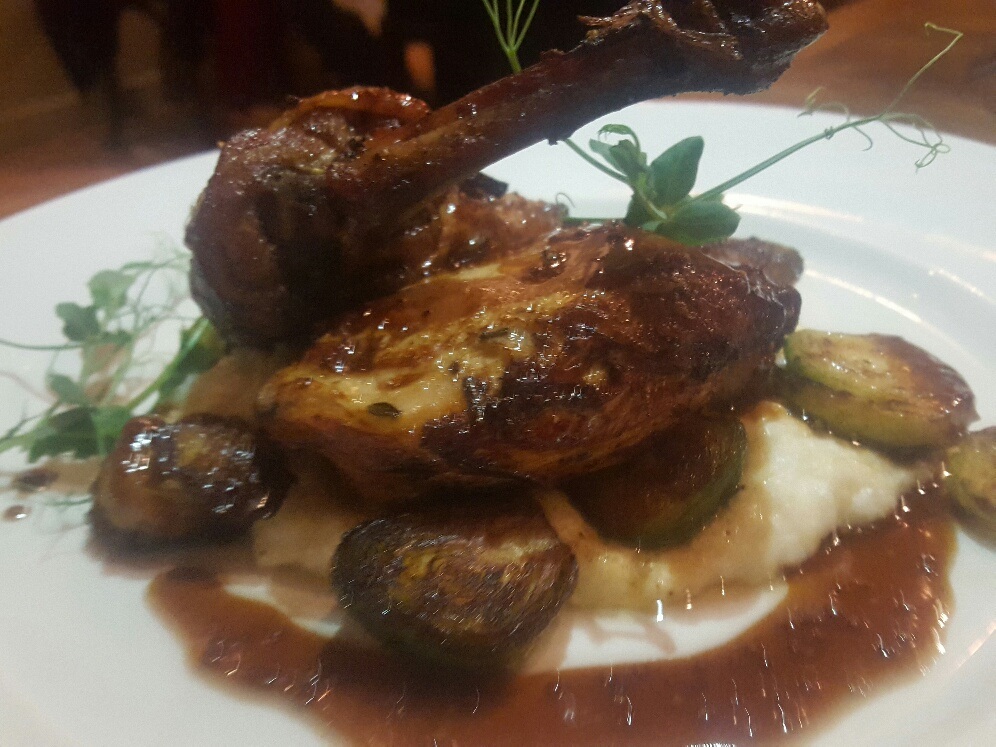 Last but not least we have the Elysian Fields Lamb Porterhouse.  It came with a white bean puree, heirloom carrots and lemon-herb chermoula.  The lamb porterhouse was really good, although I don’t believe it had enough meat to actually enjoy the whole dish without having an appetizer to go with it.  The flavors were really good as the white bean puree had more of a creamy butter flavor to it.  I thought it would have the consistency of actual beans but I was wrong.  The carrots were cooked to perfection as well and tasted almost as if they were roasted.  There are only 14 dishes on the item with 5 being seafood based and the other 5 entrees being one with meat.  The other dishes are appetizers and soups, but I expect those dishes to be equally as good as the ones I had. 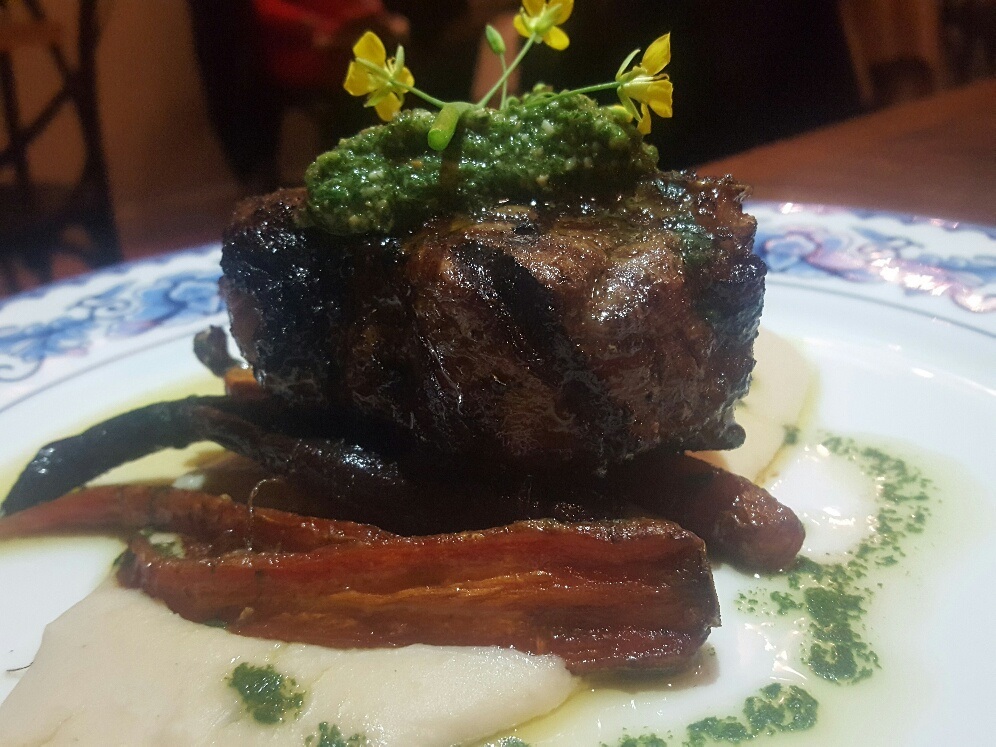 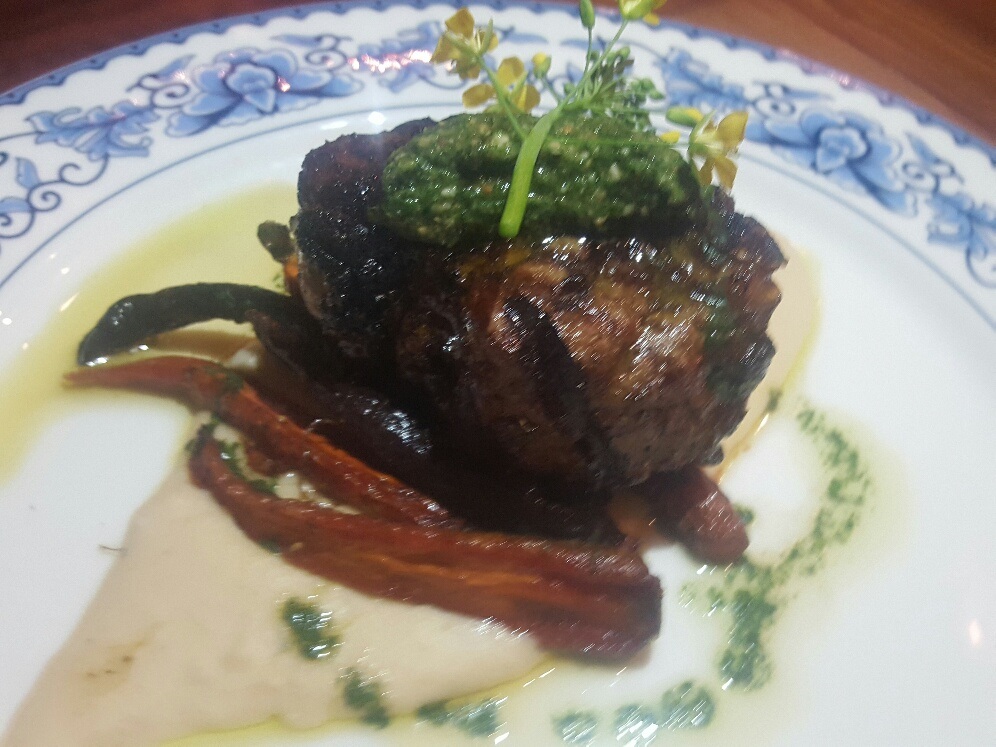 Overall, this restaurant is a go to for flavors, but besides that I wouldn’t rush.  Despite my personal opinion about how I should’ve been treated, I will not let that determine the flavors and overall food consistency with this restaurant.  I understand that restaurants run out of food as well, but it’s Wednesday.  I suppose if it was the weekend, that would cause for more panic. If you’re hungry, you may want to order an appetizer and possibly consider ordering two entrees as the portion sizes aren’t big at all.