When was the last time you stood in line for something?  Better yet, what are some things you value that are worth standing in line for?  Is it the newest IPhone?  How about the newest Jordans?  How about waiting outside of your girlfriends door, waiting for her to cool down, because she’s tired of you not doing the dishes?  I ask those questions because you valued waiting for something you absolutely knew had a worth attached to it.  Would you still stand in line for something you had absolutely idea of its worth?  Well, that was me.  Standing in the rain, for two hours, waiting for the doors to open at this Michelin Star restaurant.  No, I didn’t hire anyone to stand in line for me, because I wanted to experience “standing in line” myself.  When you wait for something and you like the outcome of it, it makes the experience that much more special.  (This goes for relationships too, yall) 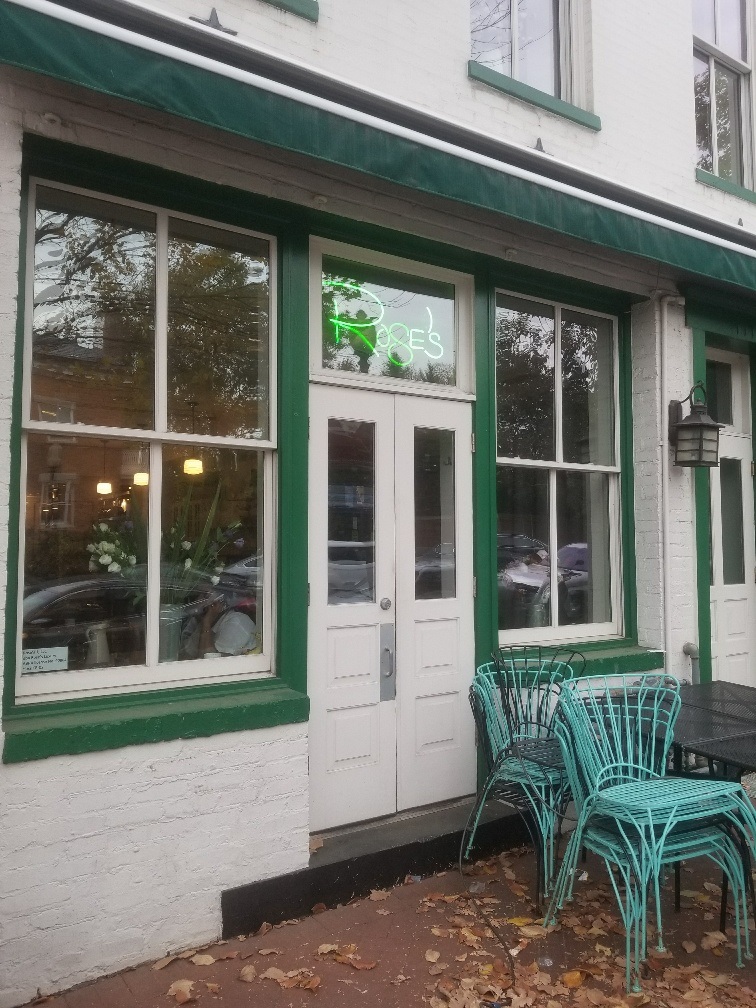 Roses Luxury is located off of 8th St. in Southeast D.C. down the street from the Eastern Market Metro Station.  It has a beautiful interior, but you can’t tell from standing on the outside.  It’s one of those “open for a surprise” restaurants.  The restaurant opens at 5 p.m. and if you get there two hours early you will have a higher chance of getting a seat when it opens.  I was able to get there a little after 3 p.m. and there were already 4 people in front of me.  What I didn’t realize is that those four people in front of me, stood there so they can reserve a spot at a later time.  The restaurant manager will come out and add your name to the list and ask what time you’d like to have dinner so a table can be reserved for you.  I like that concept because, even though you can get a reserve a table anytime after 5 p.m, you have to stand in line like everyone else. 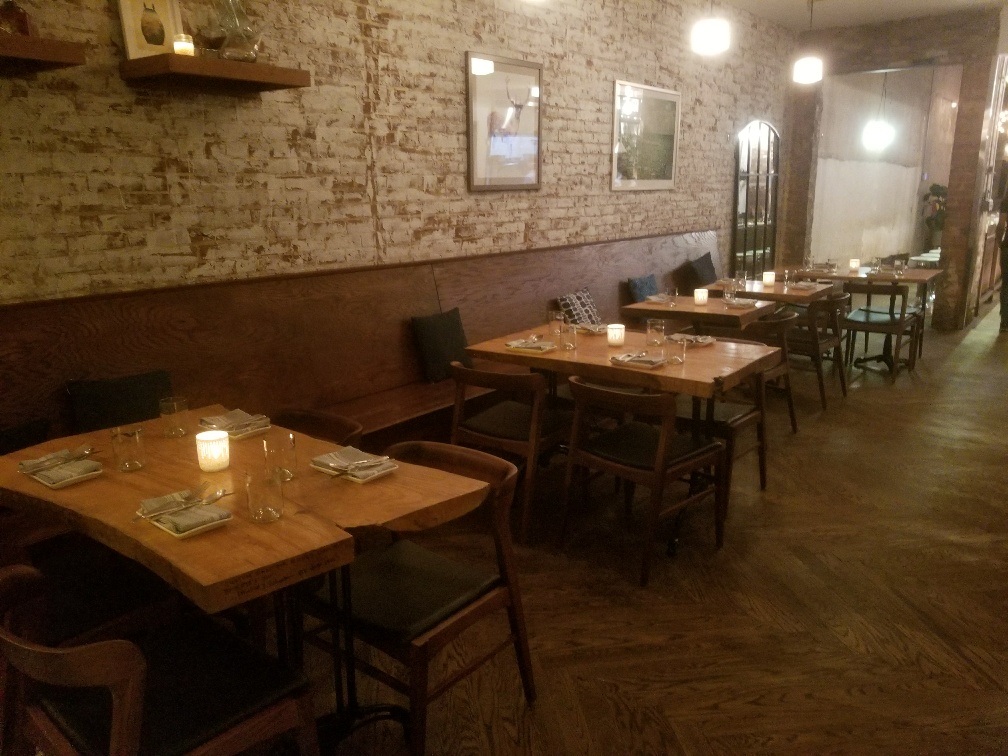 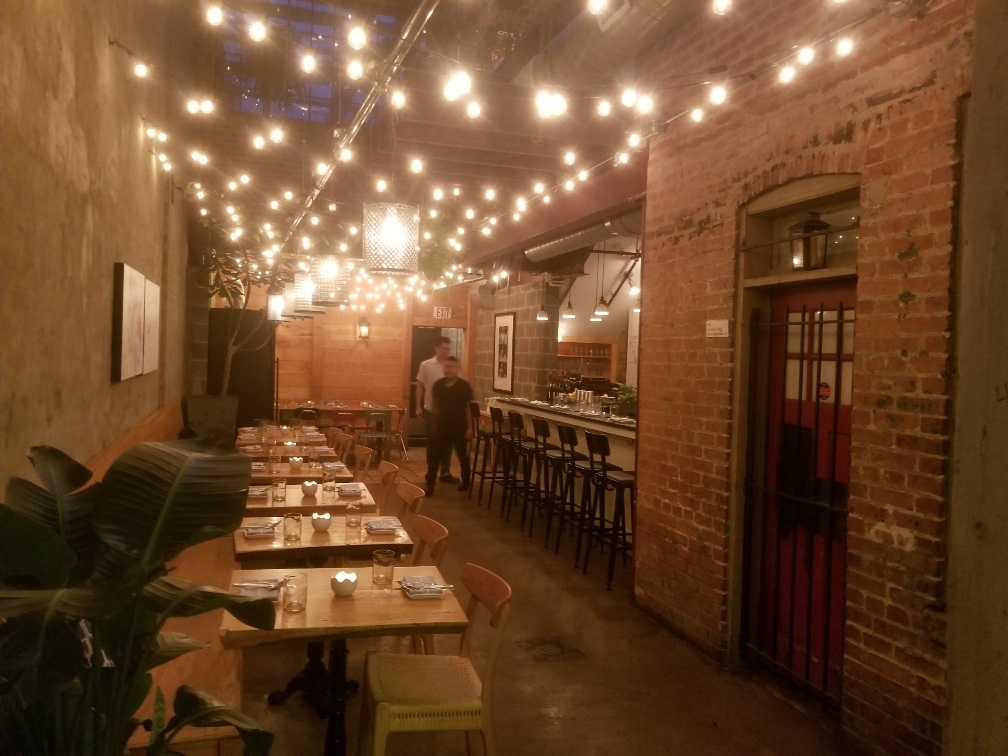 As a reward for being one of the first to stand in line, I was able to choose exactly where I wanted to sit.  I chose to sit at the “chef’s table” which is right in front of the kitchen.  I enjoy sitting in front of the kitchen because you get to see the chef’s in action.  It’s like a well oiled machine, working right in front of your eyes.  The menu changes daily so I was able to order three things off of the menu and one special they were offering for the night.  The items that were ordered was the Shaved Brussel Sprout Salad, Fried Shrimp, Hand Cut Trenette, Japanese Fried Chicken, and the special of the day Lobster Ceviche. 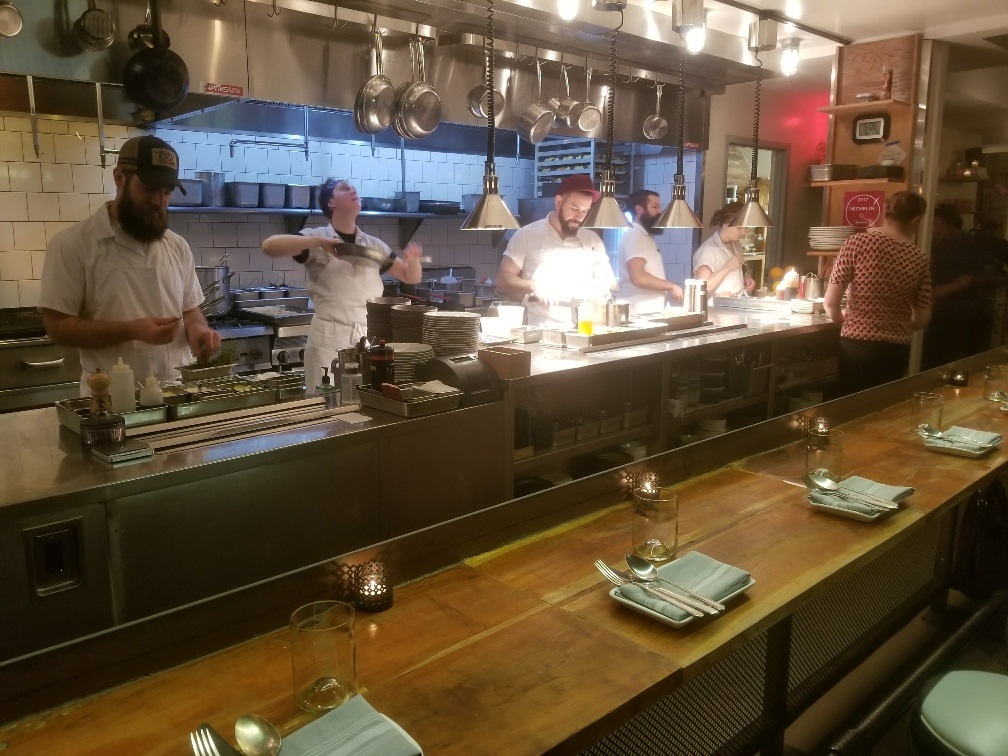 The Lobster Ceviche was the best Ceviche I’ve had in my life.  For those of you that aren’t too familiar with Ceviche it’s a seafood dish popular in the coastal regions of Latin America and the Caribbean. Some main ingredients that are generally used are lime, lemon, onion, and some other ingredients depending on what the chef uses at the time.  A quarter pound, split, Poached Lobster was presented in front of me and the Ceviche mix was separated in its own bowl.  You had the opportunity to eat the Lobster by itself or mix it with the Ceviche.  The Ceviche was sweet, cold, and worked well with the buttered flavor Lobster.  I’ve had a seafood Ceviche before, but it absolutely sucked compared to what I just ate. 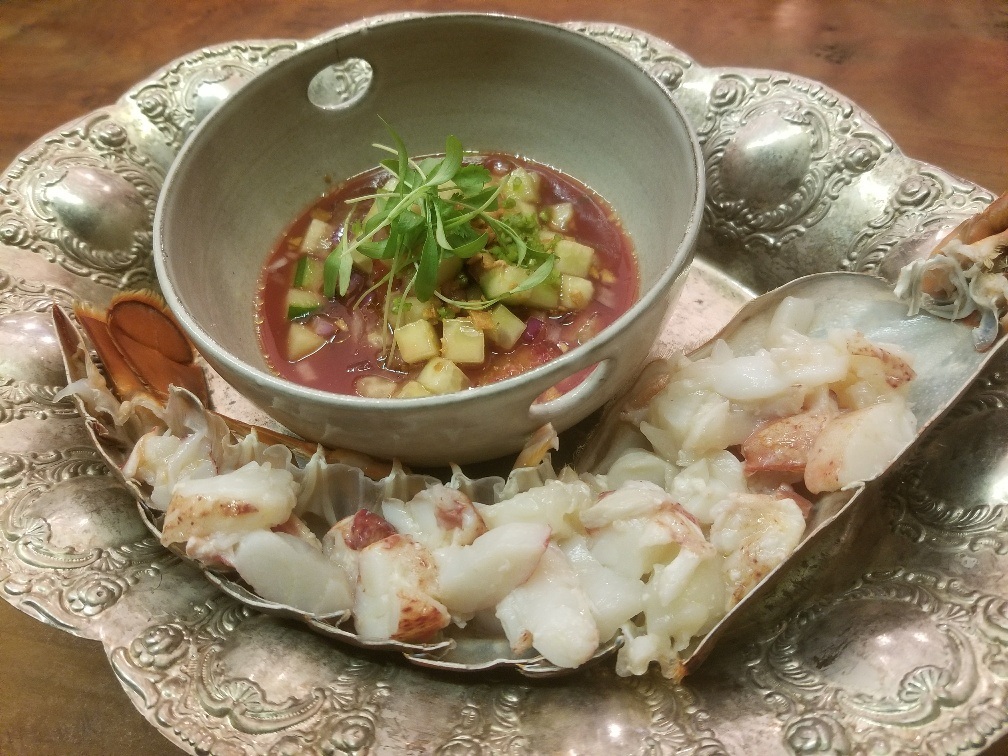 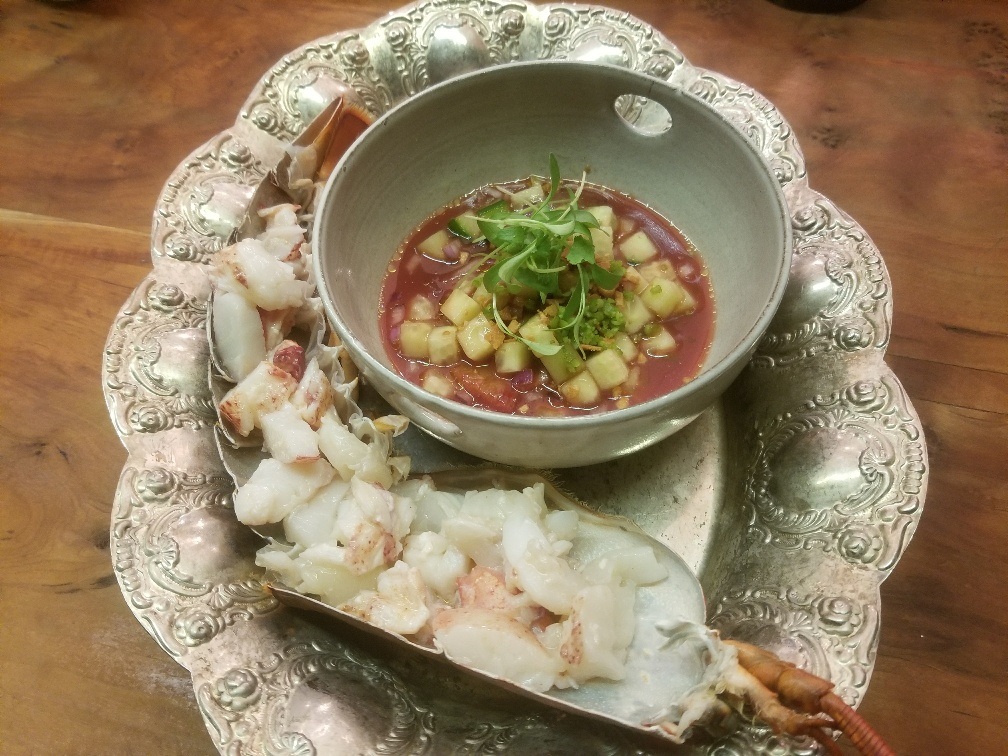 The second item that was ordered was the Fried Shrimp.  The Fried Shrimp was topped with tomatillo & avacado.  The avacado spread was so good that if I had this same item in the comfort of my own home, I’d probably lick the plate.  Yes, all table manners would be avoided in this instance.  They also smother the Fried Shrimp in cheese as well, (I won’t be descriptive of the cheese but if I could guess I would classify it as ricotta cheese) and that worked well on top of the Fried Shrimp, too. 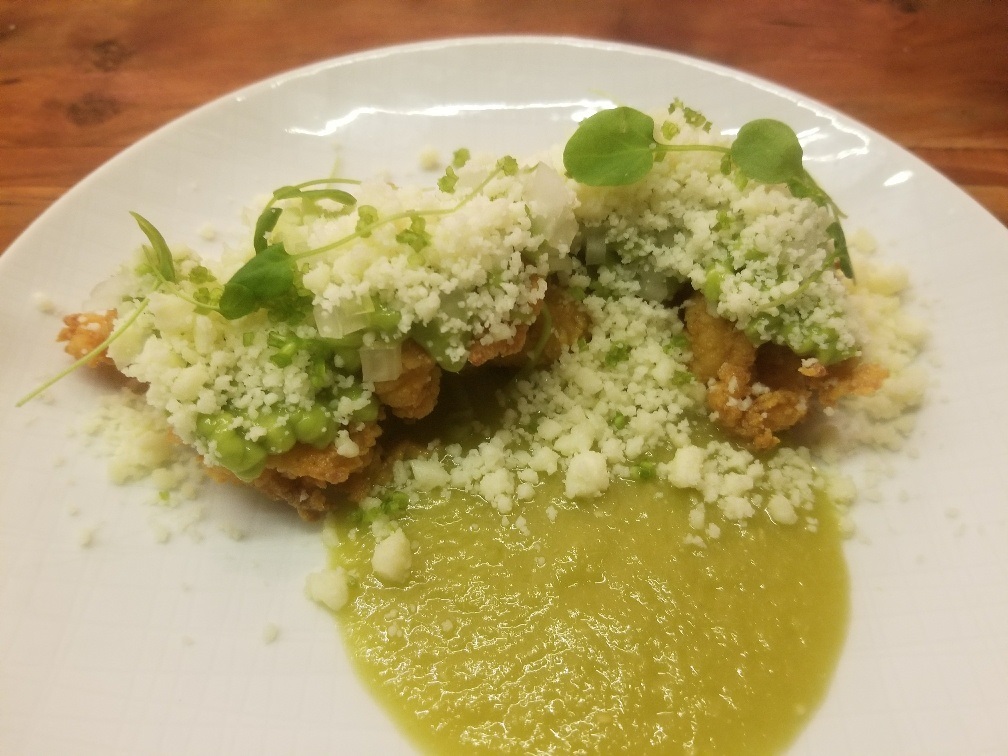 The third dish that was ordered was the Shaved Brussels Sprout Ceasar Salad.  It consisted of Parmesan, Apples, and Croutons.  I loved how they incorporated the sweetness of the apples with the bitter flavor of the Brussel Sprouts and topped it with Ceasar dressing, because all of those flavors made my taste buds scream.  I was hesitant to order this item, but I’m happy it was presented in front of me because the flavors that came out of this dish was outstanding.  If you’re not a fan of pepper, just want to note that the chef was a little heavy-handed on the pepper, but it didn’t bother me at all, it’s just noticeable.

The fourth dish that was ordered was the Hand Cut Trenette.  It consisted of Clams, White Wine, and Parsley.  Listen, this was the best fucking clam pasta I’ve ever tasted in my life.  It’s so hard to describe the taste without salivating on my keyboard.  The pasta was soft, buttery, lemony, sweet, garlicy, and had just enough meat from the clams incorporated in it.  There was one specific chef worked on pastas the whole night, and she did an amazing job creating this one.  If I could jump over the counter to kiss her and ask for her hand in marriage, I would.  But, the recent rape scandals in Hollywood doesn’t make that look “appropriate” now a days.  Before that, it would’ve been called a “True Love Story”. 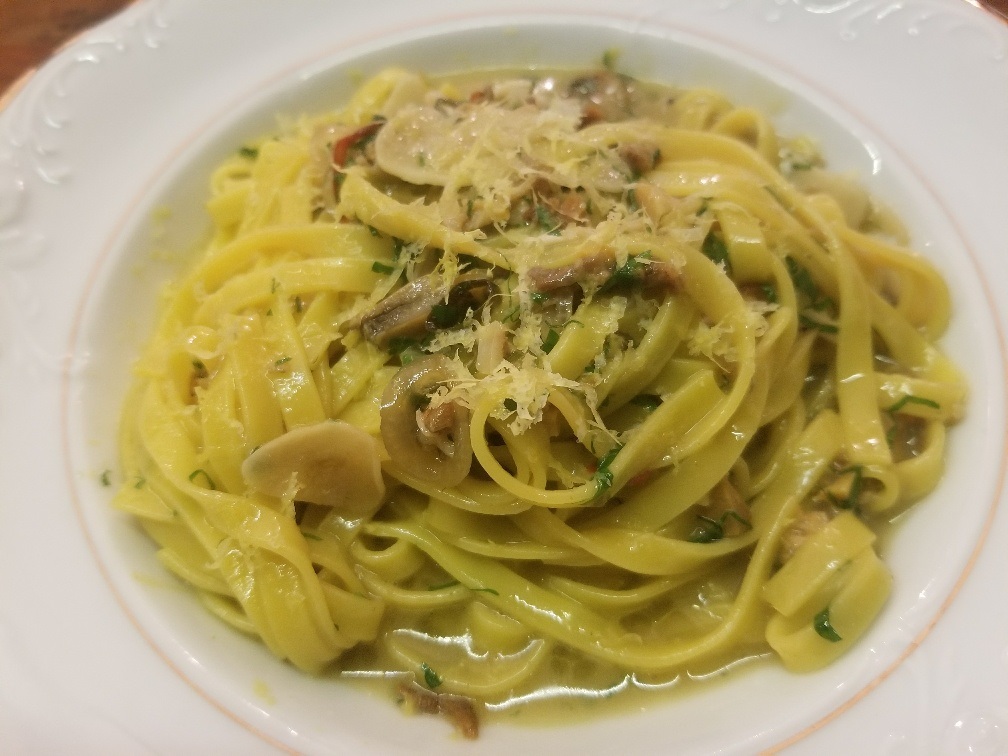 The final dish that was ordered was the Japanese Fried Chicken.  It consisted of Napa Cabbage, Potato Salad, Soft Boiled Egg, and Bonito Flakes.  I love Japanese Fried Chicken and I’ve often stated it’s some of the best kind of Fried Chicken I’ve ever had.  The portion size that was provided was HUGE!  I could honestly say three people can feast on this dish, and the best part about it was it was no more than $30.  The Napa Cabbage, Potato Salad, and Soft Boiled Egg were all a great accompany to the Fried Chicken.  The Potato Salad was sweet and the cabbage was bitter, so it helped the flavors offset each other.  This was my first time having a Poached Egg with the rest of the ingredients so I definitely was happy to have all of the items I love presented to me on one plate. 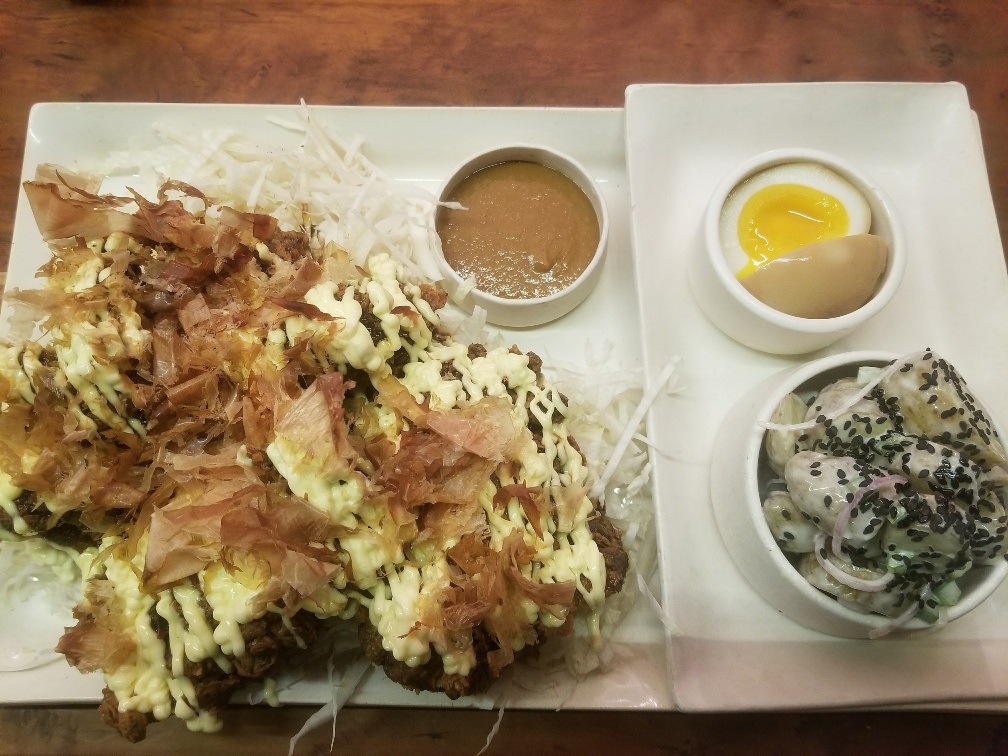 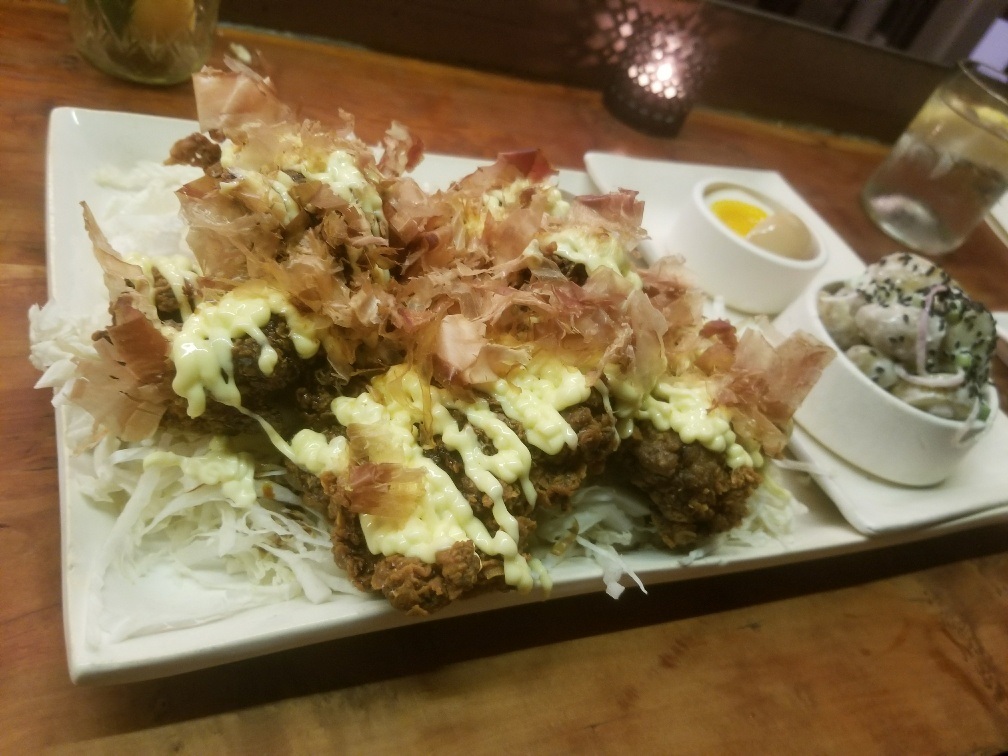 Overall, this restaurant is an, “If you don’t go here within the next month, we can NOT be friends!”.  It is worth the wait, the price is reasonable, and the experience will be like no other.  With each dish that is brought out, they are thoroughly explained.  I love how meticulous they are with each dish, and the staff seems as though they work to put a smile on your face.  This is a one star Michelin restaurant, but I would argue that it needs to be two.