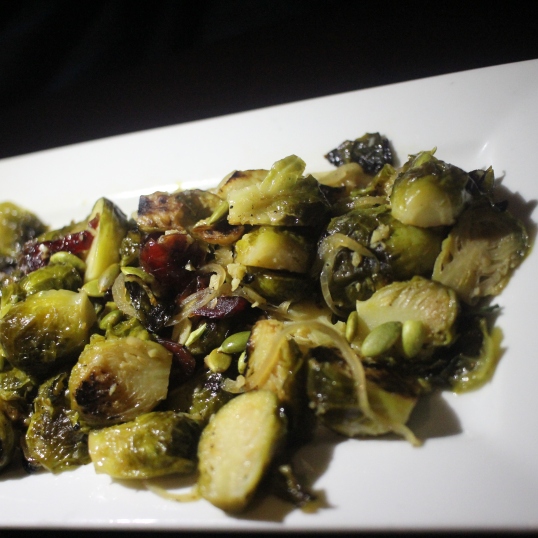 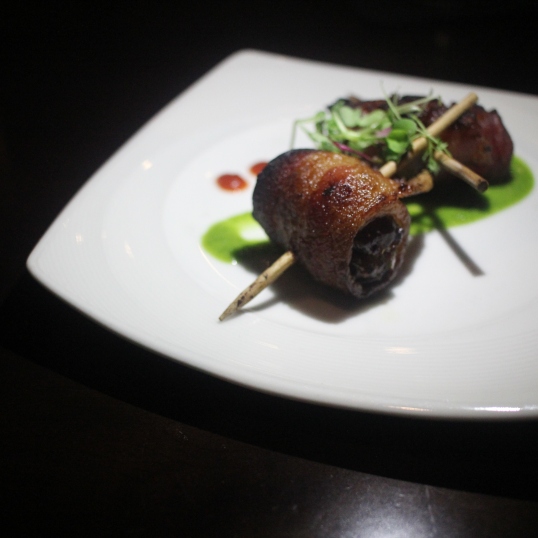 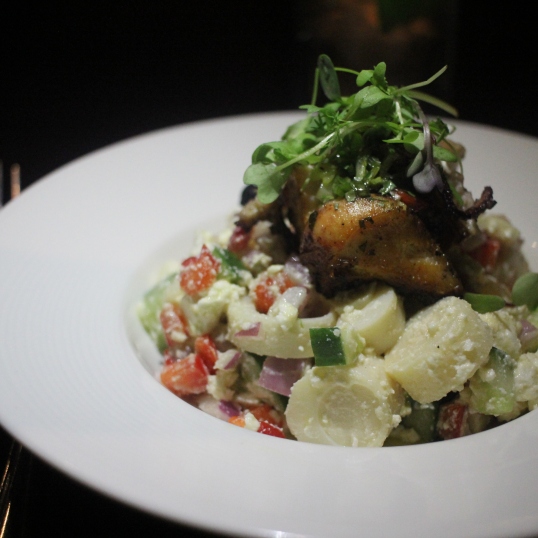 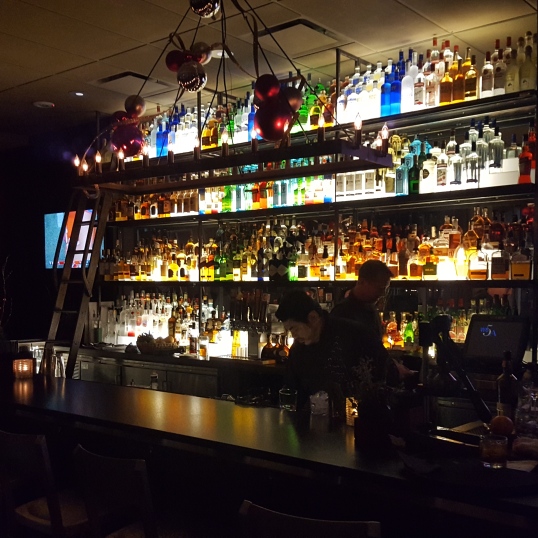 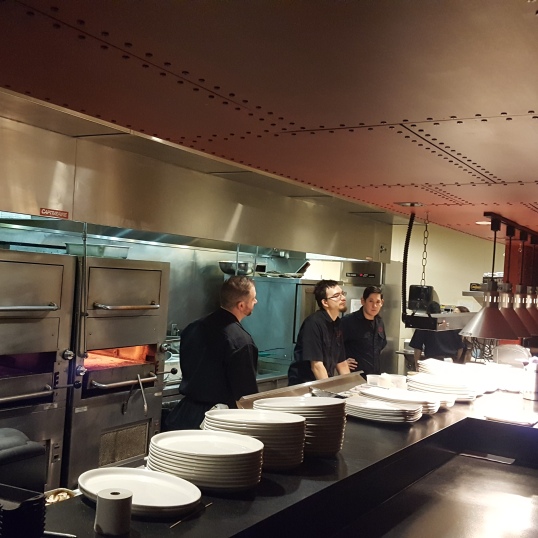 Out with the old, in with the new.  Bold Food & Drinks is just that.  It’s a new restaurant located in the eastern district of Cleveland Flats.  A new area that’s meant to revitalize parts of downtown Cleveland waterfront.  Demetrios Atheneos, part-owner and executive chef, has a  greek inspired menu that offers an array of food choices ranging from octopus to a mouth watering ribeye.  The restaurant is led by Tyler Lewis, who is the events manager and does some of the PR work for Bold Food, gave Savory Travels a brief tour of the restaurant.  I didn’t realize that I would fall in love with the decor and atmosphere of this restaurant.  The interior was beautiful and had the pefect scene for a date night or you simply want to dress up and have a nice meal.  Fun Fact : This restaurant was meant to be a steamboat, but was turned into a restaurant and once you enter the establishment you can see references of a boat as you look around.  The chandeliers (which look like something you see in a movie at a billionaires home) looked amazing, they represent the steam coming from the steamboat.  One more fun fact, all of their items are organic!

Bold Food has an exstensive menu which range from a “tiny, snack, greens, composed, bold, and side” options.  Sometimes with bigger menus it’s harder to narrow down on exactly what you want because everything sounds so good.  The first item that was ordered was the Grilled Octopus that’s accompanied with moroccan insalata, palm hearts, and farmer lee jones micr cress.  The octopus was grilled nicely.  It wasn’t too chewy and it had the perfect amount of seasoning.  The portion size is rather large for an appetizer, and even though it wasn’t a “tiny” dish just make sure you’re very hungry before you decide to induldge in this mouthwatering dish.

The second course was the “little devil” which consisted of a butcher’s chorizo, medjool dates, pork belly, and sriracha.  The pork belly was mouth watering and was wrapped around a well cooked chorizo.  This dish packed alot of flavor and this would be something I would order consistently.  This dish was apart of the “tiny” section.  The sriracha was nice accompaniement and packed the right amount of flavor to be dipped in the pork belly wrapped chorizo.

Two item entrees were ordered because I felt as though I had to get this experience with such a huge menu.  The two entree items that were ordered were the Amish Chicken Brasserie and Chilean SeaBass.  It was also suggested that the brussel sprouts are ordered to accompany the two entrees.  The amish chicken is served with garlic mashed potatoes gruyere cheese, serrano ham, and blistered cherry tomatoes.  I opted to have grits instead of potatoes, don’t ask why, I just had a taste for grits.  This wasn’t my better choice because the grits were bland and luke warm.  I also ordered prawns because I had a taste for shrimp. What was brought out weren’t prawns but instead big pieces of cocktail shrimp. If something is describe as such then I believe it should be put in front of you, correct?  There is a difference between shrimp and prawns and even though you may think it’s the same, it is not.  There’s also a difference between squid and calamari, so if anyone debates you let them know that squid is a tougher piece of meat and calamari is more tender and more expensive.  They give you two pieces of chicken and in between the meat is a piece of ham.  In my opinion it’s not alot of thought put into this dish.  It also lacked flavor and creativity.  I would have rather seen a stuffed chicken, then two chicken breast sitting diaganol from each other covered with cheese and ham surrounded by tomatoes.  If you decide to order this dish, please let me know how it goes if you decide to eat the mashed potatoes with it.

The seabass was pretty good, it had the right amount of flavor, but I did smell “fishy” before I bit into it.  I couldn’t let that pass up as when you eat fish believe it or not, it isn’t supposed to smell like fish.  Although the smell was off, just a tad but noticeable, I did enjoy it.  It was pan-seared with skin on and provided good amounts of flavor.  It was also topped with a chimichurri classic lemon sauce that added the right amount of salt and flavor that was needed.

Overall, I expected more quality from this restaurant and expected to be blown away.  Bold Food and Drink did not live up to its title and I can only attest for the Food part because I didn’t have a drink.  If you choose to go to this restaurant please have an open mind and let me know what you think.  If you decide to pass on this restaurant, give me a suggestion of another restaurant to go to in Ohio.

RATING SCALE : MAY I SPEAK TO THE CAPTAIN