I’m going to start off this restaurant review by saying this is absolutely without any question one of the best restaurants I’ve been to in Washington, D.C.  I usually give some type of “funny intro” or “brief synopsis” as to why I chose this restaurant.  Today, I’m going to spare you those thoughts and speak specifically about the love I have for this restaurant.  There are so many restaurants in the D.C. area that it’s so challenging to find the “best” one.  Even when you’ve think you’ve had the best, here comes another restaurant to question why you thought the previous restaurant was better.  This restaurant is located in the Adams Morgan area in D.C. which is one of the more popular areas for drinks and bars.  I had no idea that this restaurant was directly next door to one of my favorite sushi spots in D.C., Perry’s.  It’s been years since I’ve been to Perry’s, so I’m not sure if I’d still consider them to be the best sushi spot in D.C., but I learned that Mintwood actually owns it.  The interior of this restaurant is beautiful, cozy, and looks like it holds about 65-80 people max at one time.  What attracted me to this restaurant is that they had an extensive menu with “different” items.

I mentioned the restaurant having “different” items, but one of those items I was most excited about were the Escargot Hush puppies.  I got the idea of this restaurant by watching a youtube video of someone dining at this restaurant and ordering them.  I thought it sounded so interesting and appetizing that I had to make it a priority to try them.  Besides the Escargot I also ordered Pickled Deviled Eggs, Cracklins, French Onion Soup, Duck Breast, and a Creamy Mushroom Risotto.  If you’ve never had escargot then I suggest you find a restaurant and order it as soon as possible.  Once you get over the thought that you’re eating snails, you’ll truly appreciate the taste and texture of it.  The first time I had snails were in Louisville and it was dipped in garlic butter.  This time it was stuffed inside a crispy Hush puppy with a Tarragon Remoulade sauce for dipping.  The Escargot had a chewy texture to it, almost the consistency of a stuffed mushroom.  The Hush Puppy was seasoned to perfection and the inside was soft and moist.  This was one of the most interesting appetizers that I’ve tasted in a long time.

Have you ever had pickled deviled eggs or cracklin’?  By now you’ve been following me long enough to know what cracklin’s are but if this is your first time following me and you’re not sure what cracklin’s are, they’re pork fat and skin that have been deep fried.  Cracklin’s are what I ate growing up with a huggie to wash it down with.  Cracklin’s are an acquired taste but once you have one you’ll want to have more.  The pickled deviled eggs were interesting as well to say the least.  They literally tasted exactly as described.  They had a pickled flavor to it which made it sweet and savory.  The presentation for this dish was awesome as well.  It looked as though it was too pretty to eat, but that just makes it more desirable. 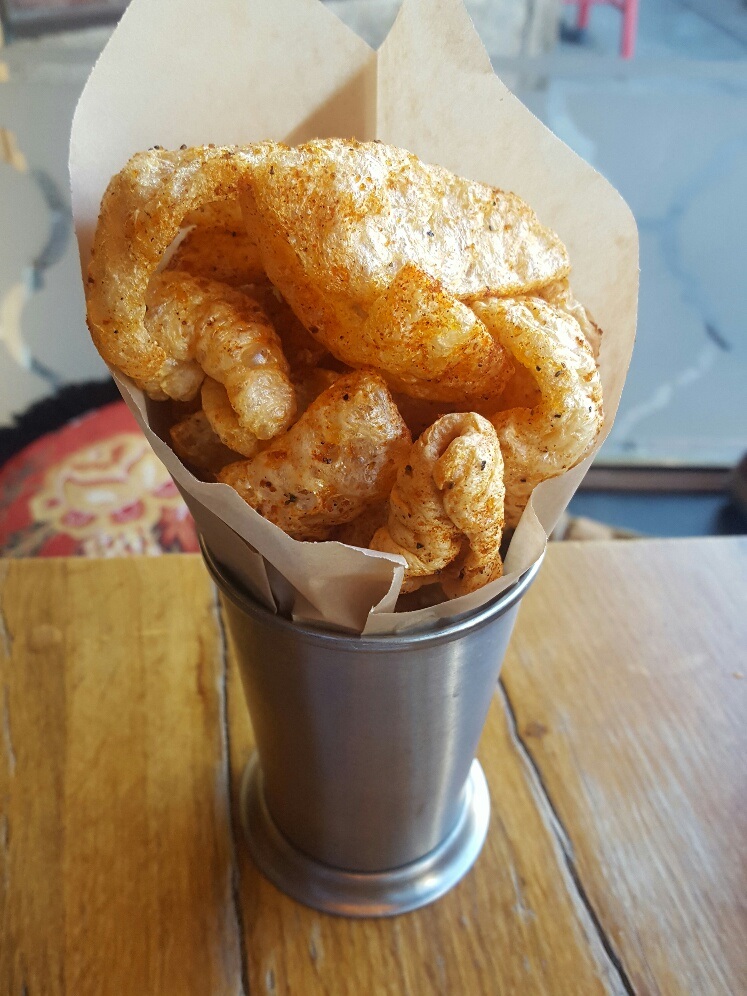 The next appetizer that was ordered was the French Onion Soup.  French Onion Soup is one of my favorite soups because it’s usually smothered in Gruyere cheese.  I absolutely love onions and it was the perfect weather to have soup.  The soup was packed with flavor and wasn’t too salty.  I’ve had salty french onion soup before, but this was cooked perfectly.  I’m not sure if this soup was cooked in wine or beef stock but either way it was really good.  I will make a mental note to ask specific questions like that to make you all aware.  I apologize.

Two main courses were ordered with the first being Duck Breast with Potato Mille-Feuille and Pomegranate Grenadine.  I like my duck breast to be cooked at a medium temperature.  When it’s cooked at a medium temperature it preserves a lot of the flavors that the duck breast give off.  The potatoes had the consistency of a creamy whipped mashed potato and the Pomegranate gave off the extra sweetness that was needed.  The duck breast were presented perfectly and sliced so it was easier to eat.  Duck is one of those things that you absolutely have to order if you see it on the menu.  It has a unique taste, very rich, and the flavors are like no other.  I’m a huge fan of lamb as you know by now, but if I had to choose with duck or lamb for dinner I wouldn’t be upset with either or.

Last but not least we have the Burgundy Truffle Risotto with Wild Mushroom and Parmesan.  This was the best risotto I’ve had in my life.  It was so creamy, flavorful, sweet, and fulfilling.  One of the best things about the dish is that the chef actually came out to the table to shave a fresh truffle over the dish.  If you’ve never had truffles before and you love mushrooms this would definitely be something you would enjoy.  Truffles are a delicacy in some areas and could go as high as $1,000 a kilo.  Truffles are dug up by pigs but they aren’t eaten by them in some countries.  They are such a prized possession that New York Truffle Dealers don’t tell you what they do for a living in concern for their own safety.  There have been plenty of stories of truffle dealers being robbed or being stalked because of the success that they’ve had in selling truffles.  It was my first time having truffles shaved table-side so the excitement that I had was like no other.

Overall, this restaurant is a must go to.  The flavors were there, the interior is beautiful and cozy, and the service is unmatched.  Once you go to this restaurant, please let me know what you think.