“Yes! Another Black-Owned restaurant opening in D.C. again”, is what should be said in an area where a large number of Blacks live.  Instead, I’m left wondering why I can count the amount of Black-Owned restaurants on my hands and toes.  Washington, D.C., which was once dubbed as “Chocolate City”, has now become more of a “Caramel Latte” where the Espresso is slightly beginning to dilute in a Gentrified city.  Sure, there are Black-Owned restaurants that have been in the city for years, but what about something new and invigorating?  Kith and Kin and… Wait, I’m thinking.. Okay, I’m stuck!  What other places that are Black-Owned in D.C. where you can go have a grand meal that differs from the traditional Soul-Food menu?  I know, very-limited, but that’s why this place is so important.

Union District Oyster Bar and Lounge, which is located off of Morse St, can be described as a high-end restaurant lounge with a close background to Soul Food and Ethnic cuisines.  It is led by Chef Tobias Dorzon who took the streets by storm with the success of his food truck warranting him to open his first restaurant.  He attended Jackson State University to pursue football on a full scholarship, but quickly learned his passion was in food after successful years in pro football.  His team is composed of fascinating individuals including Sous Chef JButler , Duan , and Buggie ; an essential floor general/kitchen manager Becca and Soloo who’s in charge of making sure your oysters come as soon as you ask for them.  This team of Young Black Professionals truly is a sight to see.  The “Union” (no pun intended), sacrifices, and cohesiveness that was displayed was eye-opening.  The interior of this restaurant has an upscale bar feel to it, but focuses more on service and the standard of food.  There has been a stigma in the Black Community where customer service lacks, but as soon as you step in the door you can feel the warmth and focus of not allowing that ignominy to be thought of. 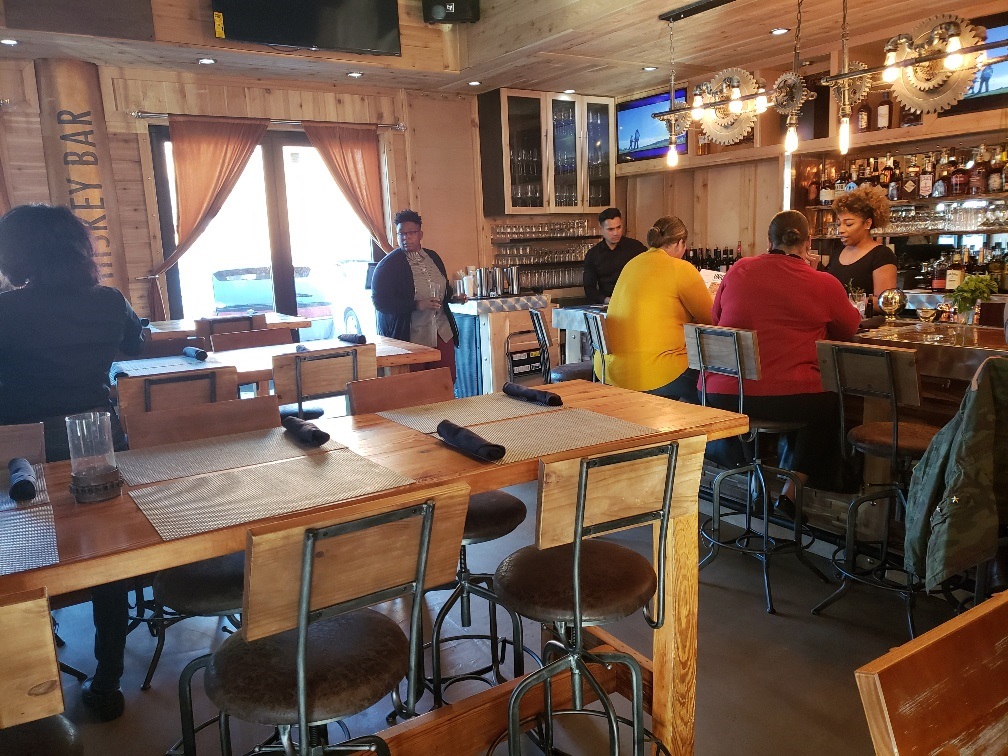 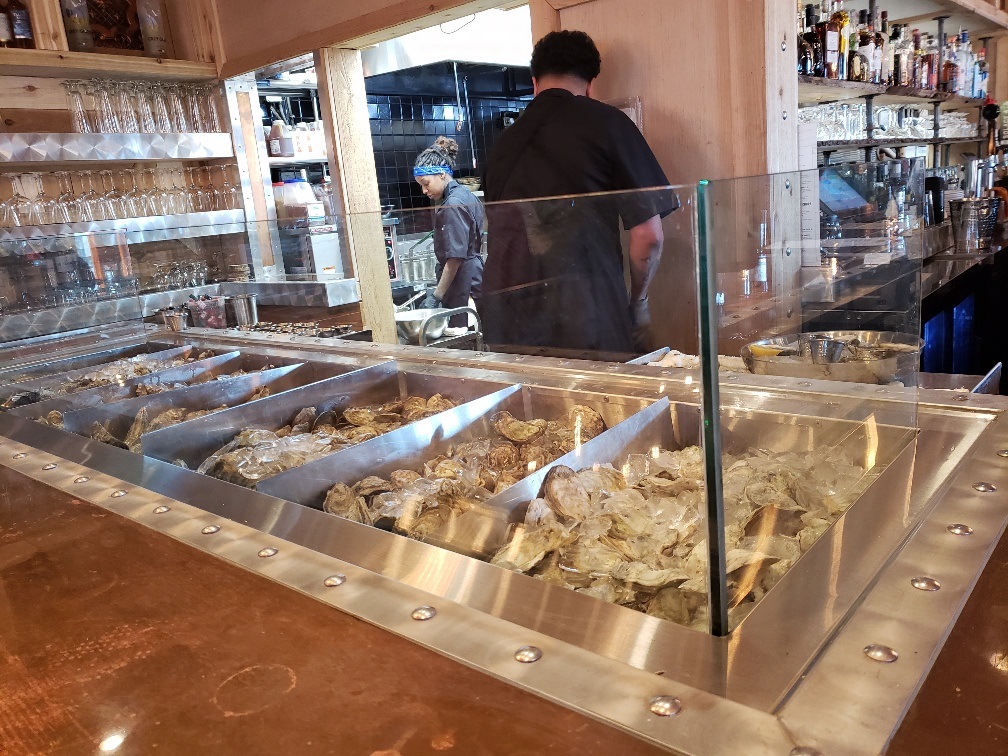 During my visit, I was able to indulge in five dishes.  Mussels, Jerk Chilean Seabass, Seafood Mac and Cheese, Grilled Cilantro Lamb Chops, and Shrimp and Lobster Jerk Pasta were the choices for the evening.  I’ll start off with the Mussels.  It consisted of Crystallized Ginger, Jalapeno, Cherry Tomatoes, and a White Wine Garlic Broth.  The Mussels were meaty and flavorful, but what stole the show was the broth.  It was a mixture of savory and spicy with a hint of sweetness.  A perfect mixture of sliced garlic to go along with the bitter taste of the Ginger worked perfectly.  A generous portion is provided and served with two pieces of Baguette to help soak up the juices of the garlic broth.  Delightful to say the least.

The next dishes were the Jerk Chilean Seabass and the Seafood Mac and Cheese.  The Seabass consisted of Mango and Black Bean Salsa with Mango Puree.  This dish was a bit under-whelming.  This is a perfect example of what was expected versus what I got.  The fish, which I thought would be a thick portion, was about an inch thick and 6 inches long.  (Sorry, couldn’t think of another resemblance of food)  It also had a fishy smell and flavor to it.  The Seabass didn’t taste fresh and I believe it was previously frozen before being served.  I would’ve loved to see a thicker piece of fish to go along with more Mango Puree and Black Bean Salsa.  The Puree was sweet and the Black Beans were hearty, but I was too despondent to appreciate the overall dish.  The Seafood Mac and Cheese was a nice recovery though.  It consisted of Crab and Lobster and the most creamy Macaroni you’ll ever have.  This was some of the best Macaroni and Cheese I’ve ever had, and was served in a cast iron skillet.  It was either the Seafood Mac and Cheese or the Fried Lobster Mac and Cheese, I’m sure I couldn’t go wrong with either or, but I never had Crab inside of Mac and Cheese so I was delighted to try it.  This is a dish that I would order ten times over. 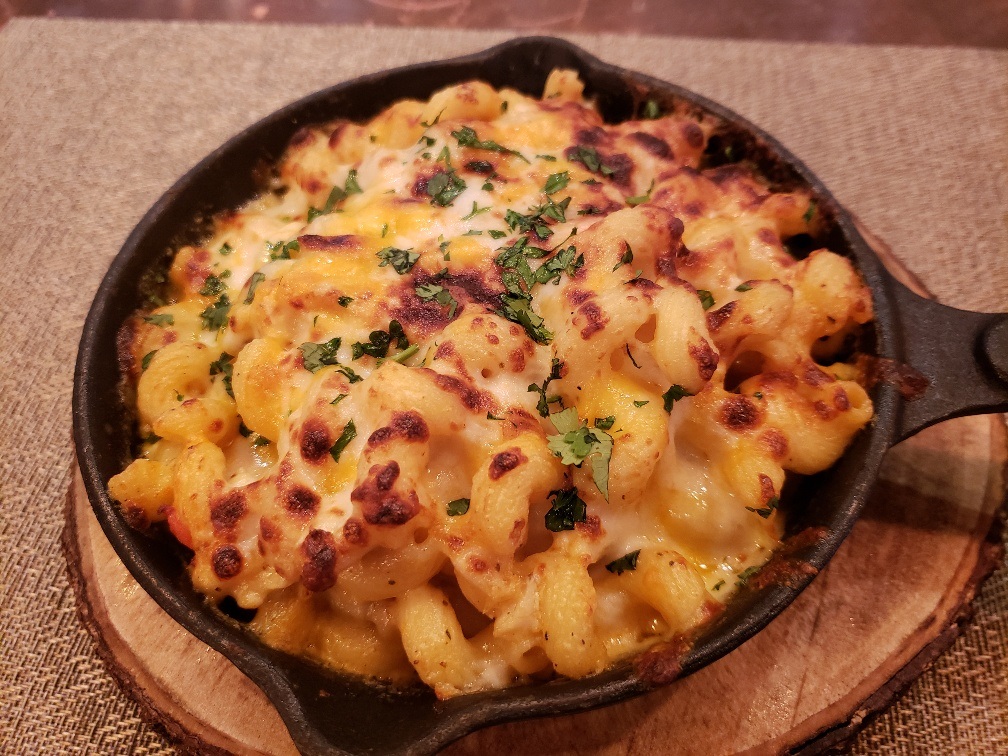 The next two dishes that were ordered were the Grilled Cilantro Lamb Chops and Shrimp and Lobster Jerk Pasta.  The Grilled Cilantro Lamb Chops consisted of Two Double Cut Lamb Chops, Jalapeno Mashed Potatoes, and Grilled Asparagus.  Well, so I thought.  There was an error in the menu, that was discovered when my dish came out with no Mashed Potatoes.  I brought it to the waitress (Gabrielle, who provided excellent service by the way) attention and she informed me that the side items were a la carte.  Being as that may be true, she informed me that the menu was wrong and it shouldn’t have been on there.  I understand that mistakes happen, but if something is printed it should be honored (if available) or offered.  These are the growing pains of a new restaurant, but facts can’t be ignored.  The Grilled Chops were succulent and Asparagus had a nice grill flavor to it, so I wasn’t too wretched with the non-existent mashed potatoes.  The green sauce that surrounded the Chops was some of the best I’ve had.  It had a chili-lime sauce to it, but more of a sweeter version of it.  The last dish was the Shrimp and Lobster Jerk Pasta. This dish was one of those dishes that can have you unbuttoning your pants when you’re finished eating.  The pasta had a nice bite to it, the Shrimp was buttery, and the sauce was creamy.  The Yellow and Red Peppers added the sweetness but what stood out was the flavor of the Broccolini.  It was made with ginger and it stood out with the Jerk Cream Sauce.  The lobster was a bit over-cooked as it had the same bite as the pasta, but the overall dish was pleasing.  This would be a dish I would consistently order as well.

Overall, this restaurant is a go-to. There were some things that were noticeable that I would describe as growing pains.  The dessert I was looking forward to having was the Hennessy Bread Pudding which was described as a special for the night, only to come back seconds later stating other items would be offered for dessert.  Attention to detail is important for any restaurant or business, but often Black businesses get scrutinized more because some believe it shouldn’t exist.  This place is destined for greatness.  The restaurant opened three days ago, so mistakes are expected, but once this machine get’s going, there’s no holding back.