Searching for the best restaurant you could possibly go to when you’re traveling is pretty challenging.  What if the food isn’t good?  What if the ambiance sucks?  Well, what if you weren’t born?  (Ok, that may have been a bit extreme, but you get what I’m saying)  I enjoy the What If’s when dining at a restaurant.  It gives me the opportunity to go into that establishment with an open-mind, but also an expectation that I expect to prove myself right by choosing the best restaurant that I could.

Mourad, which is a One-Michelin Star restaurant in San Francisco, CA., is a Moroccan influenced restaurant that showcases rich and vigorous flavors that combine fresh and local California ingredients.  The interior of this restaurant is alluring.  High Ceilings, a bright kitchen, and dare I say?  One of the best restrooms I’ve ever seen.  (No seriously) During my visit I couldn’t decide what I should order so it was decided to order a bit of everything off the menu.  The dishes that were ordered were Salmon, Octopus, Scallops, Braised Beef, and Branzino. 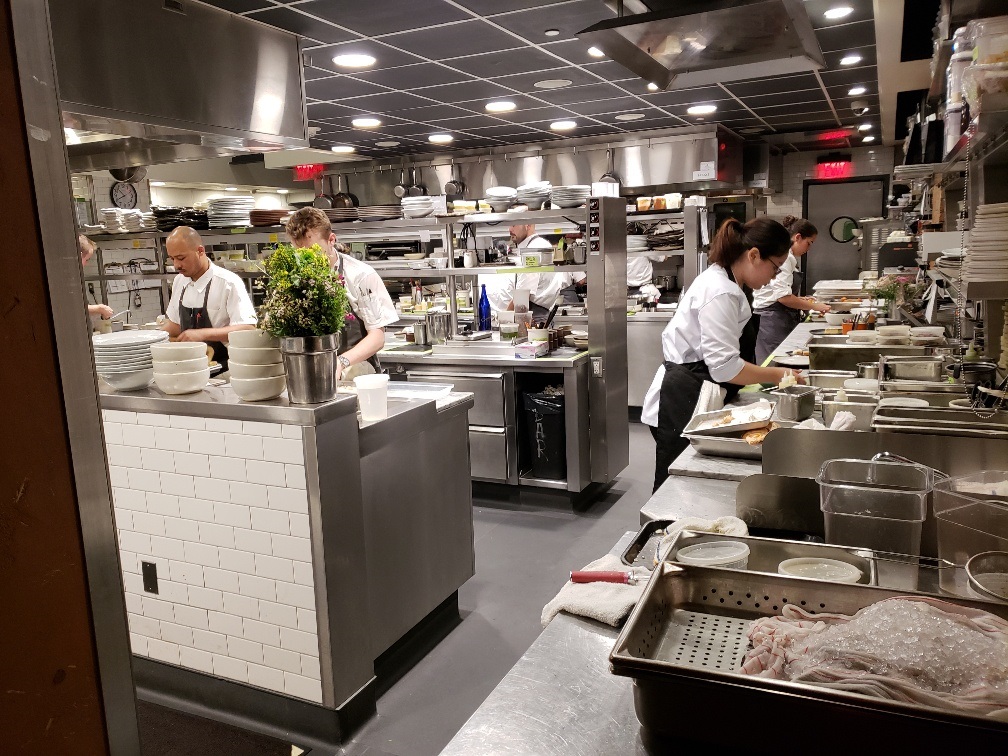 The Salmon was Applewood smoked with avocado, persimmon, curry, and romanesco.  If you’re unfamiliar with persimmon, it’s a fruit that has a similar taste to honey.  The Applewood smoke flavors worked well with the sweetness of the persimmon and the earthiness of the romanesco and avocado.  The dish was beautifully presented and represented the perfect portion size.  I can describe this dish for days with adjectives that’ll make your mouth water, but I’m trying to figure out if I actually chewed this dish.  Yes, that’s how good it was.

The next dish was the Octopus.  It consisted of Brussels Sprouts, Cauliflower Puree, Mustard, and Preserved Lemons.  If you’ve been following me you’ll understand my love for Octopus.  The texture and taste are definitely one of my favorites, but to mix it with Cauliflower Puree and Brussels Sprouts is genius.  This dish was so captivating that I went home and tried to recreate it.  It wasn’t a fail, but it didn’t come close to this dish that I had.  It was sweet, perfect texture, and an overall ravishing dish.

The third dish that was ordered was the Scallop.  It consisted of Little Gem, Potato, Sorrel, and Dill.  If you’re unfamiliar with Little Gem it looks like tiny versions of Romaine lettuce, with a crisp, crunchy texture and a sweet flavor.  I’m not a big fan of lettuce being grilled because it doesn’t enhance the flavor of it.  It takes away the flavor and leaves you with whatever fire the Gem was cooked with.  What put me at ease with this dish was the butter sauce that surrounded the Pan Seared Scallops along with the crispiness of the potatoes and onion flavor.  The overall dish was good, but it just wasn’t for me. 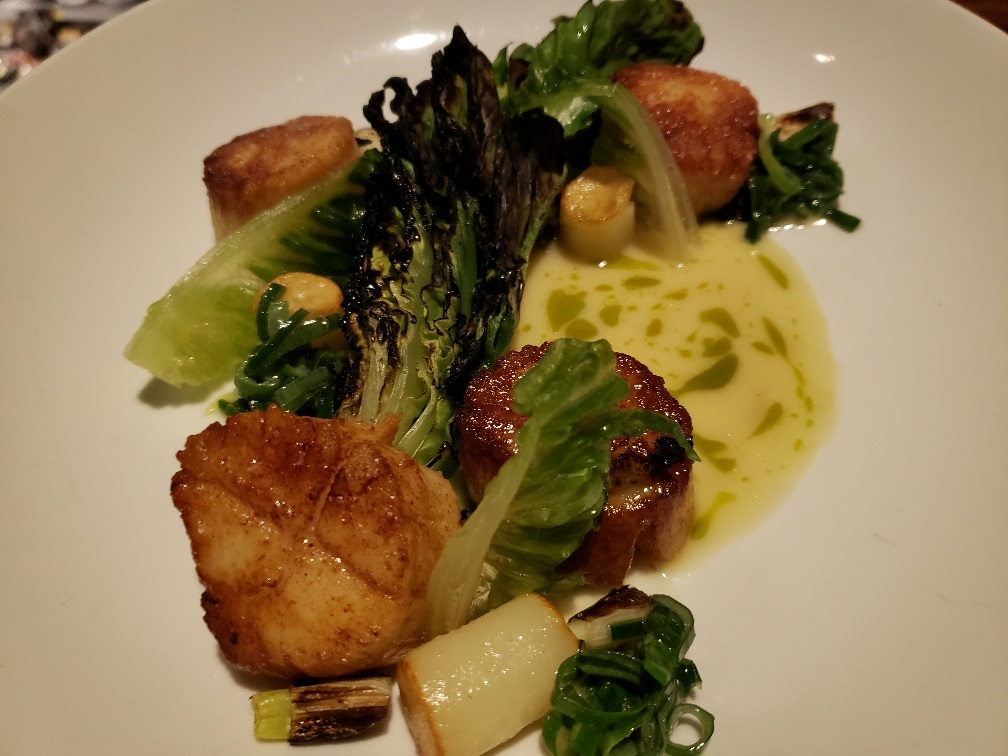 The fourth dish that was brought was the Braised Beef.  Huckleberry, sunchoke, brassicas, and charmoula surrounded the Braised Beef which put the overall dish over the top.  Huckleberry’s are mostly known as blueberries and vice versa, but to add that with the Beef was a flawless idea.  The Braised Beef was tender, juicy, and melts as soon as it came in contact with your tongue.  The sunchokes added the starch to the dish but what stole the show was the main feature, which was the Beef.  I actually had to stop myself from slobbering all over my computer while I thought about how great this dish was. 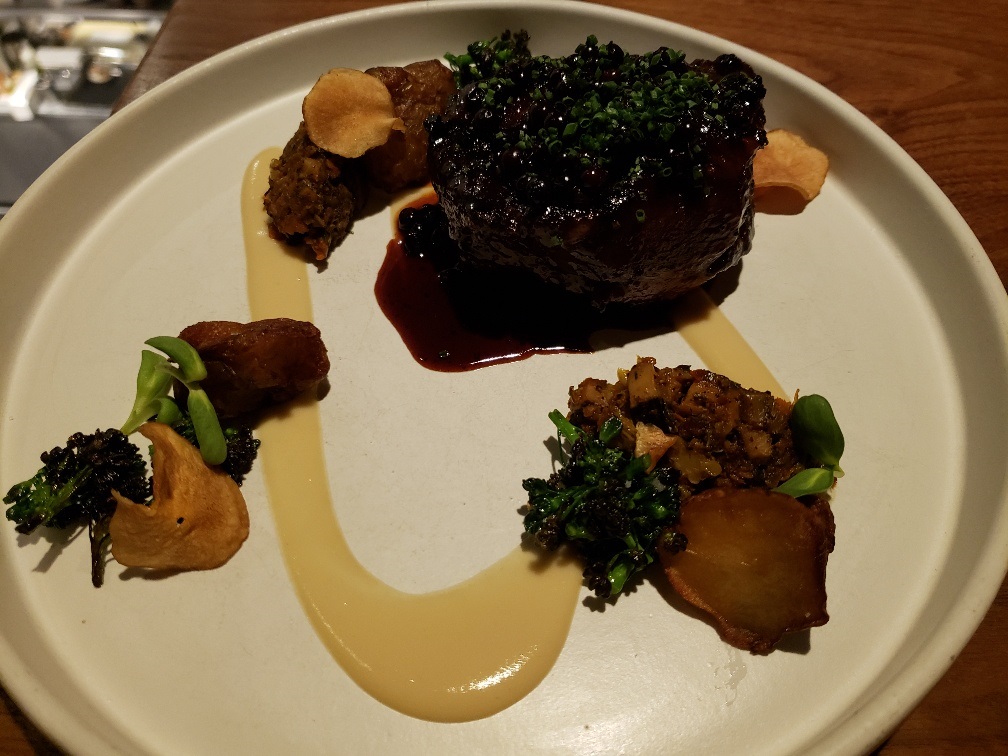 Last but not least, was the Branzino.  It consisted of Matsutake, Sweet Potato Puree, Baharat, and Hazelnut.  Matsutake is a mushroom that derives from Asia, Europe, and parts of North America.  It has a strong odor to it, and can be eaten barely cooked.  It goes really well with hazlenut because they both have a nutty aromatic flavor, and works really well with the Sweet Potato Puree.  The puree almost had a candied flavor to it, but didn’t over-power the meaty texture of the Branzino.  The fish was pan-seared and presented skin side up, where all of the flavor is.  The spiciness of the Bahart helped combined the fish flavor as well as the candied flavor of the puree to complete the entire dish.  This was one of my favorite dishes of the night, and although all of the dishes were spectacular this one had my attention the most.

Overall, this restaurant is a must-go.  There’s a reason is rated a Michelin-Star. Chef Brionna, who I had the pleasure of orchestrating the grill, helped my overall experience with a show she didn’t realize she was orchestrating.  This place has beautiful plating, a gorgeous interior, hell, even the Chef’s are beautiful!  Did I mention Chef Louis Maldonado was voted Sexiest Man Alive in 2018?  But, don’t try any funny business, the head Pastry Chef AnneMarie might have a word with you.  Although, I’m sure she just laughs at the idea of those gawking over her husband.  I’m certain her love life is as confident as her cooking.